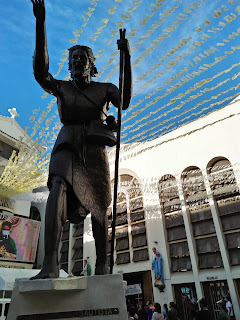 Before the removal of the plastic buntings, 14 June 2021 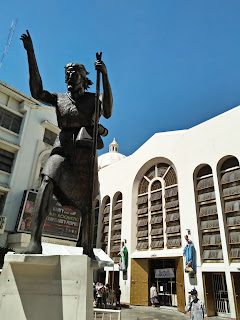 After the plastic buntings have been removed, 16 June 2021
The prompt removal of single-use plastic fiesta banderitas adorning the side plaza of St. John the Baptist, patron saint of Quiapo Church, was greeted with loud cheers by a non-profit group advocating for a zero waste and toxics-free future.

This came after the EcoWaste Coalition last Tuesday called out the Quiapo Church for decorating the place with single-use plastic buntings, which the group insisted was incompatible with the bishops’ call for ecological conversion in the face of climate emergency.

To recall, the Catholic Bishops’ Conference of the Philippines (CBCP) through a pastoral statement issued in 2019 made “an urgent call for ecological conversion,” which, among other things implored the dioceses “to live the spirit and principles of Laudato Si (Pope Francis’s encyclical on ecology) through concrete ecological actions,” including “eliminating single-use plastics.”

“When we called the Quiapo Church’s attention to the wasteful use of plastic buntings, we were confident that they would listen and they did listen,” said Jove Benosa, Zero Waste Campaigner, EcoWaste Coalition.

“We laud Monsignor Ding Coronel, rector and parish priest, for listening to our plea against the senseless use of disposable plastic decors that only add to plastic pollution,” he said.  “This will certainly please Cardinal Jose Advincula, the soon-to-be installed head of the Archdiocese of Manila, whose episcopal motto is Audiam (I will listen).”

“The concrete action by the Quiapo Church eliminating single-use plastic buntings will surely not go unnoticed, being the home of the Black Nazarene that is venerated by millions of devotees from near and afar,” Benosa pointed out.  “We trust more churches will follow suit and go plastic-free.”

“Hopefully, this will also rouse the faithful into moving away from single-use plastics and going for reusable options in our daily lives,” he said.

According to the EcoWaste Coalition, single-use plastic fiesta buntings contribute nothing but residual garbage that could even pollute the oceans and harm marine life.

The use of plastic “labo” as buntings is very problematic, the group said, as this super thin plastic type is easily blown away to streets and water bodies, including Pasig River, contributing to marine plastic litter.

A recently released study by the Netherlands-based Ocean Cleanup tagged Pasig River and 18 other rivers in the Philippines among the top 50 rivers contributing to  plastic pollution of the world's oceans.