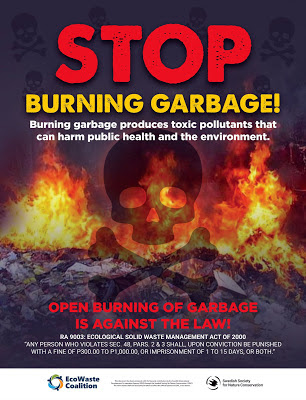 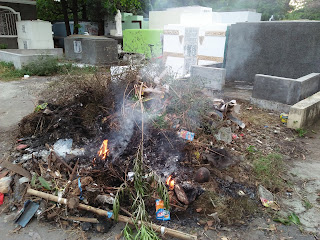 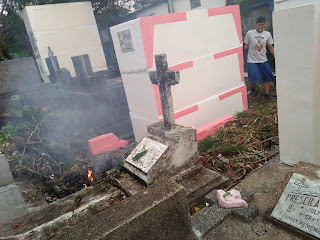 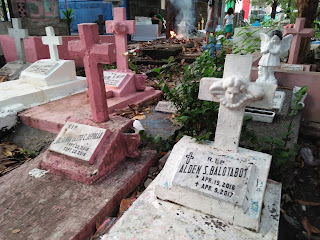 Health and environmental advocates raised the alarm against the dangers of open burning as citizens started flocking to cemeteries to clean up the graves of their deceased relatives in time for the upcoming observance of Undas.

Through a joint statement, public health expert Dr. Maricar Limpin and zero waste campaigner Jove Mendoza reminded the people that open burning is unhealthy, as well as illegal and punishable under the country’s environmental laws.

“The open burning of discards from the sprucing up of the tombs of our dearly departed ones should be completely avoided for various health reasons,” said Limpin, a well-known pulmonologist and Secretary of the Philippine College of Physicians.

“Open burning generates environmental pollutants such as smoke and soot containing toxic fine particles and other substances of concern that can get into the lungs and the blood stream.  Exposure to these pollutants can cause breathing difficulties and trigger asthma, bronchitis and other respiratory illnesses, especially among children, the elderly and those already suffering from weakened immune systems,” she said.

Aside from particulates, open burning is known to produce other harmful contaminants such as dioxins, greenhouse gases like carbon dioxide, heavy metals like lead, polycyclic aromatic hydrocarbons, and other pollutants.

“Because of its known negative effects on public health and the environment, open burning has been banned under our national laws as well as city, municipal and barangay ordinances as an essential pollution prevention measure,” pointed out Benosa, Zero Waste Campaigner, EcoWaste Coalition.

Among the laws banning and penalizing open burning are Republic Act 9003, or the Ecological Solid Waste Management Act, and Republic Act 8749, or the Clean Air Act, he said.

While R.A. 8749 states that “no person shall be allowed to burn any materials in any quantities which shall cause the emission of toxic and poisonous fumes."

“Instead of burning discards, we appeal to cemetery administrators and visitors to follow the provisions of  RA 9003, which requires the segregation of discards at source and their ecological management such as by composting the biodegradables and recycling the recyclables,” said Benosa

“Grass clippings, plant cuttings, and other organics are better turned into compost rather than toxic smoke and soot,” he added.