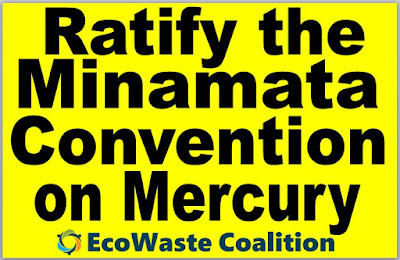 The waste and pollution watchdog group EcoWaste Coalition has appealed to the national government to fast track the country’s ratification of a global treaty that aims to protect public health and the environment from the deleterious effects of mercury poisoning.

“We strongly believe that our country is ready, willing and able to ratify and implement the provisions of the Minamata Convention on Mercury, which the government signed six years ago on October 10, 2013,” said Thony Dizon, Chemical Safety Campaigner, EcoWaste Coalition.

“As a matter of fact, our country has already achieved a number of policy and regulatory milestones to control, if not eliminate, mercury pollution from human activities,” he said.

“We therefore request the Duterte government to ratify the treaty and to secure the necessary concurrence by the Senate,” he said.

Dizon cited the phase-out of mercury-based medical devices such as thermometers in 2010, the ban on mercury use in artisanal and small-scale gold mining in 2012, the adoption of extended producer responsibility for mercury lamps in 2013, and the prohibition on over 135 mercury-contaminated skin whitening products from 2010 to 2018.

Most recently, in July 2019, the government launched the “National Action Plan for the Phase-Out of Mercury-Added Products (MAPs) and the Management of the Associated Mercury-Containing Wastes” in anticipation of the global phase-out target by 2020 for specified MAPs.

“The ratification of the pact will strengthen our country’s resolute efforts to combat mercury pollution as this will allow us to fully engage in treaty processes as Party to the Convention.  Also, it will allow us to gain more access to financial resources, technology transfer, and capacity-building opportunities,” Dizon pointed out.

According to the “Ratification Dossier” published by the Environmental Management Bureau, “the existing policies, programs, and regulations have, to some degree, prepared the Philippines in terms of fulfilling the requirements of the Convention.”

It noted that “despite the economic cost to comply with the provisions of the Convention, the long-term benefits of becoming a Party far outweigh the disadvantages.”

The dossier cited that “the Convention is consistent with the country’s basic policy to protect and preserve the right to health of Filipinos, and the right of the people to a balanced and healthful ecology.”

“With the aid of the Convention, the ever-increasing threat of mercury pollution to public health and environment could be minimized or eliminated,” the dossier said.

To recall, the mercury treaty is named after the city of Minamata in Japan, which suffered decades-long incidence of mercury poisoning due to the discharge of industrial wastewater into the sea by a chemical factory.

The treaty, which entered into force on August 16, 2017, has been ratified by 113 countries to date.

Among other things, the mercury treaty provides for a ban on new mercury mines and the phase-out of existing ones, the phase-out and phase-down of mercury use in a number of products and processes, control measures on emissions to air and on releases to land and water, and the regulation of artisanal and small-scale gold mining.

The third meeting of the Conference of the Parties to the Minamata Convention on Mercury, or COP3, will take place in Geneva, Switzerland from November 25 to 29 this year.

whereinbacolod said…
I love your article, thanks for sharing!
Wednesday, October 02, 2019