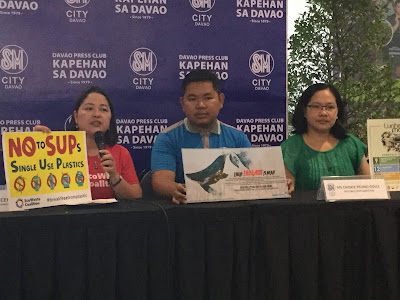 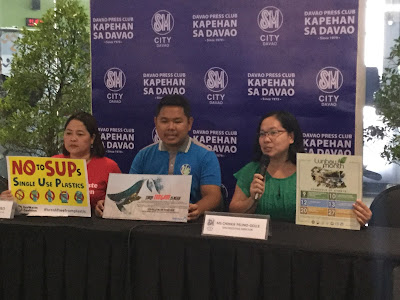 Two environmental health organizations have added their voices to the chorus of citizens seeking a phase-out of the most wasteful evidence of our throw-away society: single-use plastics or SUPs.

For the Davao City-based Interfacing Development Interventions for Sustainability (IDIS) and for the Quezon City-based EcoWaste Coalition, SUPs, also referred to as disposable plastics, have to go to stem the tide of chemicals and plastics polluting the natural environment, including the world’s oceans.

IDIS, a group championing the protection and management of life-sustaining watersheds from ridge to reef in South-Central Mindanao, is pushing for a citywide ban on SUPs, while the EcoWaste Coalition, a group advocating for a zero waste and toxics-free future, is pushing for a law that will ban SUPs nationwide.
SUPs typically include plastic items intended to be used once before they are disposed of or recycled such as bottles, cutlery, cups, sachets, stirrers, straws, and the ubiquitous plastic bags and polystyrene containers or Styrofoam.

“Banning SUPs will have a huge impact on Davao City’s daily waste generation estimated at 570-600 metric  tons per day,” said Chinkie Peliño-Golle, Executive Director, IDIS, noting that SUPs and other residual wastes make up 29% of the city’s trash.

“This will translate to less plastic being produced, consumed and disposed of, less plastic being dumped or burned, and less plastic leaking to the Davao Gulf and into the Pacific Ocean.  Aside from the benefits of cutting plastic pollution, banning SUPs will also help in re-shaping people’s behavior with increased awareness on the need to cut down on plastic use and the overall disposable culture,” she added.

With Councilor Diosdado Mahipus Jr. chairing the Committee on Environment, IDIS and the Davao CSOs - Sustainable Davao Movement are optimistic that an ordinance banning SUPs will be enacted before 2019 ends.  The councilor, who is co-organizing the "Ban SUPs" symposium today, had earlier expressed his commitment to prioritize the enactment of the said measure for which the environmental groups are most thankful.

For her part, Aileen Lucero, National Coordinator of the EcoWaste Coalition, pointed to the need for the 18th Congress to fast track the passage of a law that will ban SUPs.

“We urge Congress to legislate a national ban on SUPs to curb chemical and waste pollution that is causing untold harm to the natural environment,” she said.

“Such a law is needed to stimulate and strengthen actions by local government units to address the scourge of throw-away plastic.  It should set a phase-out target and timeline,  promote alternatives, and provide for incentives to encourage consumer and industry shift to eco-friendly products and packaging,” she further said.

Citing a 2018 UN report on SUPs, IDIS and the EcoWaste Coalition enumerated some of the environmental problems associated with SUPs, including plastic bags clogging waterways and exacerbating natural disasters, plastics being ingested by marine animals who mistake them for food, and toxic emissions from the burning of plastic wastes.

“There is evidence that the toxic chemicals added during the manufacture of plastic transfer to animal tissue, eventually entering the human food chain,” the report said.

According to the same report, “Styrofoam products, which contain carcinogenic chemicals like styrene and benzene, are highly toxic if ingested, damaging the nervous systems, lungs and reproductive organs. The toxins in Styrofoam containers can leach into food and drinks.”