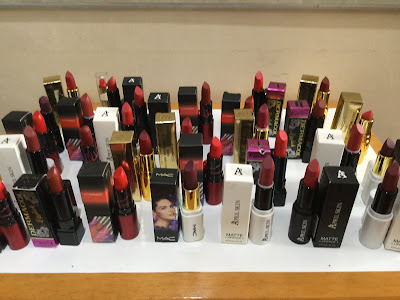 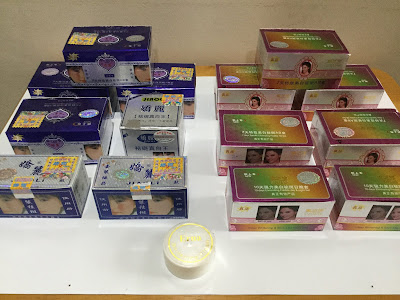 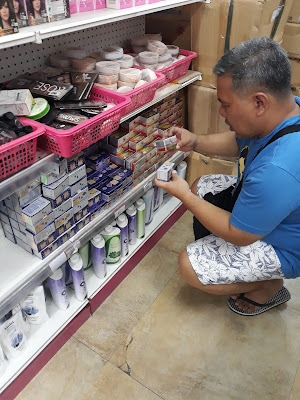 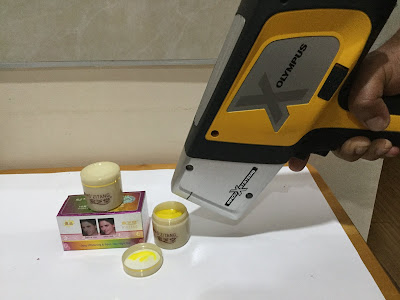 Davao City/Quezon City.  A non-profit toxics watchdog group has again alerted Davao City consumers, especially women and girls, against buying and using  contraband and counterfeit cosmetics that are contaminated with dangerous levels of mercury and lead.

The EcoWaste Coalition put consumers on full alert after a visiting team from the group’s office in Quezon City procured dozens of skin whitening creams and lipsticks containing mercury and lead above the regulatory limits of 1 and 20 parts per million (ppm), respectively.

The group bought the dangerous products on September 7 and 8 from downtown Davao retailers for P20 to P120 each, and subsequently screened them for heavy metals using a portable X-Ray Fluorescence (XRF) analytical device.

Out of 20 skin whitening products, 13 were found to contain mercury in excess of the 1 ppm limit.  Mercury amounting to 1,187 to 2,330 ppm was detected in Erna, Jiaoli and S’Zitang creams, which have long been banned by the Food and Drug Administration (FDA) due to their high mercury content.

Out of 100 lipstick products, 24 had lead levels ranging from 118 to 30,500 ppm.  Counterfeit lipsticks bearing the names MAC Vivaglam, Dermacol and April Skin were found to be laced with lead way above the 20 ppm limit.

“Both lead and mercury are highly toxic and are not permitted as ingredients in cosmetic product formulations.  The continued sale of cosmetics laden with these poisons, most of which are contraband and counterfeit items, is putting the health of consumers at risk and should be stopped,” said Thony Dizon, Chemical Safety Campaigner, EcoWaste Coalition.

“The group’s latest exposé provides a compelling reason for the city government to act.  As this appalling trade in toxic cosmetics has been going on for years, we urge the City Council to consider enacting an ordinance as a deterrent to such an unlawful act,” said Chinkie Peliño-Golle, Executive Director, Interfacing Development Interventions for Sustainability (IDIS).

In addition to regular monitoring of business compliance to product safety regulations, the EcoWaste Coalition and IDIS urged city authorities to impose tougher sanctions, including hefty fines, jail time and business permit cancellation, against erring establishments and individuals, especially those who repeatedly engage in the unlawful manufacture, importation, distribution or sale of unsafe goods that can harm human health and the ecosystems.

Both groups believed that combined national and local government action has to be strengthened to protect public health and the environment from dangerous chemicals lurking in consumer products such as cosmetics.

“Aside from the health benefits that such action will bring about, halting the sale of poison cosmetics will prevent the leakage of lead and mercury into the environment, particularly when these chemicals are discharged into the wastewater and into water bodies,” the groups pointed out.

Both mercury and lead are highly toxic even at low levels, are well-studied neurotoxicant, and recognized endocrine disrupting chemicals.  The World Health Organization (WHO) has listed lead and mercury among the “10 chemicals of major public health concern.”

Adult exposure to mercury can cause physical tremors, vision abnormality, irritability and memory problems, while adult exposure to lead can cause joint and muscle paint, high blood pressure, difficulties with concentration or memory, mood disorders, and miscarriage, stillbirth or premature birth in pregnant women.

According to the WHO, “the main adverse effect of the inorganic mercury contained in skin lightening soaps and creams is kidney damage.”  It added that “mercury in skin lightening products may also cause skin rashes, skin discoloration and scarring, as well as a reduction in the skin’s resistance to bacterial and fungal infections.”

The Minamata Convention on Mercury has set a global phase-out target by 2020 for cosmetics such as skin lightening creams and soaps with mercury content above 1 ppm.

This Philippines, which has signed but not yet ratified the said chemical treaty, launched last July 2019 a "National Action Plan (NAP) for the Phase-Out of Mercury-Added Products and the Management of the Associated Mercury-Containing Wastes."

The NAP, developed with support from UNIDO and the Swiss Government and with inputs from public and private stakeholders, including the EcoWaste Coalition, contains a detailed account on what "the government is planning to take to address the environmentally sound management of mercury-containing products with a life-cycle approach in accordance with the Minamata and Basel Conventions."