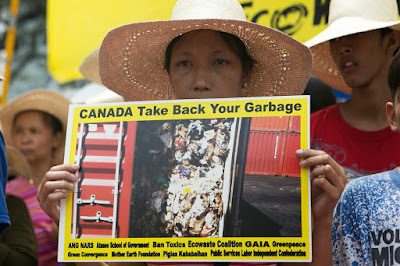 A new legal opinion has found that Canada violated an international treaty with reference to the thousands of tons of garbage shipped to the Philippines in 2013 and 2014 and is continuing to act illegally now by not taking back the wastes.

A legal opinion prepared by lawyers at the Pacific Centre for Environmental Law and Litigation based in Victoria BC, Canada has concluded  “there is a strong argument that Canada has violated the Basel Convention in respect of the transboundary movements of wastes from Canada to the Philippines in 2013 and 2014 by the Canadian-based company Chronic Inc.”

Canadian, Filipino and international environmental groups have now sent the legal opinion and a letter to Prime Minister Trudeau challenging his government to stop violating the Basel Convention and take back the wastes. In their letter, the groups point out that Canada’s conduct is not only illegal but also immoral and demonstrates disrespect towards developing countries.

Through a letter sent on April 15, Kathleen Ruff of RightOnCanada, Theresa McClenaghan of the Canadian Environmental Law Association (CELA), Dr. Tadesse Amera of IPEN, Jim Puckett of the Basel Action Network (BAN), and Aileen Lucero of the EcoWaste Coalition asked Trudeau “to act on this legal opinion and its Basel Convention obligations and provide a clear and definite date by which it will repatriate its garbage so that this protracted ordeal can finally be promptly ended.”

The said legal opinion and letter can be accessed here:

“Canada should meet the standard set by the Republic of Korea which has acted to promptly arrange the return of its wastes illegally dumped in the Philippines, citing Convention obligations,” the groups said.

The upcoming Conference of the Parties of the Basel Convention starting April 29 in Geneva, Switzerland “provides Canada an opportunity to demonstrate its commitment to the treaty by announcing the take-back of the wastes illegally exported to the Philippines,” the groups pointed out.

•            Philippine authorities notified Canada of the illegal traffic of these wastes as early as March 2014 and have sought Canada’s assistance in returning the wastes. To date, Canada has refused to take back any of the wastes. This refusal violates Article 9, paragraph 2 of the Basel Convention.

•             For more than 5 years, Canada has failed to take responsibility to properly manage the wastes in question, which were generated in Canada, and has left the Philippine government with the burden and costs of dealing with the wastes, contrary to Article 4, paragraph 10 of the Convention.

“This is much more than a legal or technical matter. It is also a moral issue that demonstrates Canada’s level of respect for the citizens of developing countries and how the nation demonstrates proper conduct. Leaving Canada’s garbage in another country for five years reveals values that clash with moral responsibility,” the groups said.

“While Canada was not legally obliged to obey the 2016 Philippine court order, it certainly had a moral responsibility to do so. The Canadian government should not ignore the court order,” the groups emphasized.

To recall, the EcoWaste Coalition on January 30, 2019 and RightOnCanada and other organizations on February 11, 2019 wrote to Trudeau requesting him to ensure the expeditious return to Canada of the wastes that were illegally exported from Canada and dumped in the Philippines in contravention of Canada's obligations under the Basel Convention.

The Canadian government has not responded to the said letters and has taken no action to have the wastes returned. Instead, the government issued media statements claiming that Canada did not act improperly in 2013-2014 and is not acting improperly now.

RightOnCanada is an Internet and public advocacy campaign for human rights.  CELA is a  non-profit group that uses existing laws to protect the environment and advocate environmental law reforms.  IPEN is a global network of more than 500 environmental and health groups in over 100 countries working to eliminate the world's most harmful chemicals.   BAN is a global watchdog group championing environmental health and justice by ending toxic trade.  The EcoWaste Coalition is a national network of over 140 groups striving for a zero waste and toxics-free Philippines.