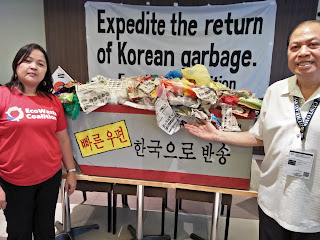 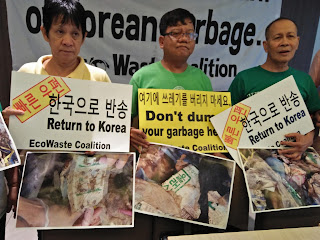 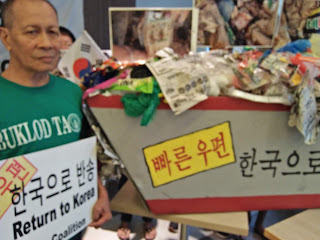 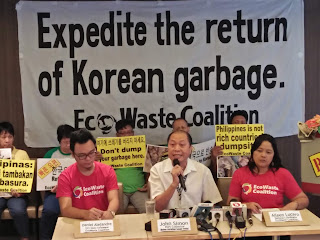 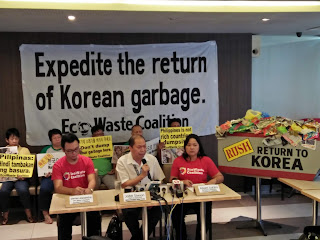 The governments of the Philippines and South Korea have reached agreement that will ensure the repatriation of some 6,500 tons of mixed wastes stranded at Misamis Oriental to their origin in Pyeongtaek City this January.

At a press conference jointly called by the Bureau of Customs (BOC) and the EcoWaste Coalition, Mr. John Simon, Port Collector at the Mindanao International Container Terminal (MICT) announced January 9, 2019 as the target date for the re-export of 51 containers of mixed garbage back to South Korea.

“We expect the 51 garbage-filled containers stored at MICT to be homebound by January 9 provided that all regulatory requirements are readily available. Their expedited re-export is what BOC wants and this is what our people are yearning for,” Simon said.

“We look ahead to the imminent return of the Korean mixed garbage shipments to their source, and to the adoption of stringent policies to prevent their recurrence, including a crackdown on the importation of plastic waste.  We need to act decisively to protect our country from turning into a global dump for plastics and other wastes that China no longer wants,” said Aileen Lucero, National Coordinator, EcoWaste Coalition.

Simon explained that the re-exportation of the 51 containers to South Korea is due to the failure of the consignee, Verde Soko Philippines Industrial Corp., to secure prior import permit from the Department of Environment and Natural Resources (DENR) and for its misdeclaration of the garbage shipments as “plastic synthetic flakes.”

The re-exportation order is pursuant to the provisions of Republic Act 10863 (Customs Modernization and Tariff Act), Republic Act 6969 (Toxic Substances and Hazardous and Nuclear Wastes Control Act), and the Basel Convention on the Control of Transboundary Movements of Hazardous Wastes and Their Disposal, the BOC emphasized. The re-export of the said 51 containers is estimated to cost US$47,430, specifically for inland and ocean freight charges.

As for the bulk Korean garbage shipments sitting at the Verde Soko compound inside the Phividec Industrial Estate in Barangay Sta. Cruz in Tagoloan, Simon announced that arrangements will be made to get them re-exported within this month.

The agreement was made following a fruitful bilateral meeting between the two governments last December 27 and 28 at Tagoloan, Misamis Oriental, which drew over 35 participants, including a four-member delegation from South Korea led by Mr. Lee Jong Min from the Ministry of Environment.

Also present at the meeting were invited representatives from the private sector, including the MICT Services Inc., Maersk Lines, Chamber of Customs Brokers, Inc. and the EcoWaste Coalition.

It will be recalled that a shipload of 5,176.91 metric tons of misdeclared “plastic synthetic flakes” exported by Green Soko Co. Ltd. and consigned to Verde Soko Philippines Industrial Corp. arrived at the MICT in July 2018 without prior import clearance from the DENR.

The same consignee facilitated the importation of additional 51 containers of “plastic synthetic flakes,” which arrived at the MICT in October 2018.

Subsequent inspection by customs and environmental officials found the imported “plastic synthetic flakes” as "misdeclared, heterogenous and injurious to public health,” causing uproar in both the Philippines and South Korea, including protest actions by the EcoWaste Coalition outside the embassy of the latter in Taguig City on November 15 and December 13, 2018.

The Tagoloan Municipal Council has passed a resolution "strongly condemning the importation of plastic mixed with hazardous waste materials from South Korea," while Senators Koko Pimentel, Nancy Binay and Grace Poe have filed separate resolutions directing the proper Senate committees to conduct an inquiry in aid of legislation,

On November 21, 2018, the government of Korea announced: “The Ministry of Environment on November 21 initiated legal procedure to have the wastes in question in the Philippines be brought back in accordance with Article 20 of the Law on Cross-border movement and Disposal of Wastes—Prior Notice of Repatriation Order—and embarked on investigation of the violation of Article 18-2 of the said law—False Export Declaration.”