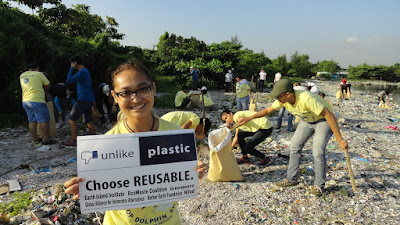 Photo from the clean-up drive and waste audit conducted by zero waste groups in July 2016 at Freedom Island, Paranaque City.

A waste and pollution watch group exhorted the public to mind their trash as families and friends get ready to visit the beaches and other recreational spots to beat the summer heat.

The EcoWaste Coalition asked domestic tourists to aim for “zero marine litter,” especially in coastal areas, to make this year’s summer vacation a pleasant experience for humans and for Mother Earth as well.

“We appeal to all vacationers not to abandon their discards in our beaches and other recreational sites,” pleaded Ochie Tolentino, Zero Waste Campaigner, EcoWaste Coalition.

“Leave only your footprints in the sands.  Please don’t leave your cigarette butts, plastics and leftover foods behind,” she said.

“Keeping our beaches and shores free of trash is one way of reducing the volume of marine litter that is turning our seas into giant landfills to the detriment of the marine wildlife,” she added.

“Used plastic carry bags, for example, can be easily blown by wind into the sea where aquatic animals mistake them for food,” she explained.

Other discards from recreational activities can harm the coastal and marine environment in a big way, she added.

To prevent and reduce marine litter that is threatening the health of our seas and oceans, the EcoWaste Coalition urged vacationers to avoid single use packaging materials and products that people simply throw away.

Disposable plastic bags, plates, cups and cutlery, plastic straws, polystyrene containers and the like may be “convenient” to bring and use, but their arbitrary disposal is surely a threat to the environment, the group said.

In lieu of single-use items that people normally bring to the beach, the group urged the public to go for reusable products, which can be cleaned and reused countless times such as reusable “bayong” and cloth carry bags, reusable dinnerware and cutlery, washable cloth napkins, etc.

Marine litter, as defined by the United Nations Environment Programme, refers to
“any persistent, manufactured or processed solid material discarded, disposed of or abandoned in the marine and coastal environment.”

Also known as marine debris, marine litter includes “items that have been made or used by people and deliberately discarded into the sea or rivers or on beaches; brought indirectly to the sea with rivers, sewage, storm water or winds; accidentally lost, including material lost at sea in bad weather (fishing gear, cargo); or deliberately left by people on beaches and shores,” the UNEP said.

Aside from the ingestion, entanglement and habitat destruction issues, marine litter such as plastics may contain toxic chemicals and may provide the means to transport harmful chemicals to distant places resulting to the contamination of the marine food chain.

Studies conducted by the EcoWaste Coalition in collaboration with partner organizations in 2006, 2010, 2014 and 2016 showed alarming amounts of plastic marine litter, particularly in the Manila Bay.