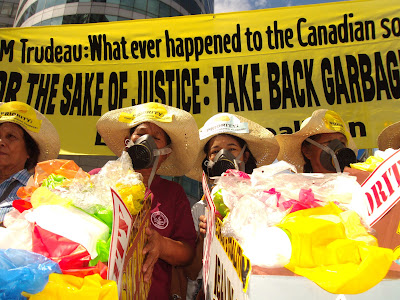 Cause-oriented groups today implored the parties responsible for the illegal importation of garbage from Canada to abide by the court’s “return to origin” order without further delay.

The five groups and three other individuals are intervenors to Criminal Case No. 14-311191 versus importer Eduardo et al for violation of R.A. 6969 or the Toxic Substances, Hazardous and Nucelear Wastes Control Act in relation to DENR A.O. 28-1994 and DENR A.O. 29-1992.

Prosecution attorney Christine Fatima Estepa submitted the “motion for compliance” to the clerk of court last March 6, which was subsequently addressed at the hearing on March 17.  Today, March 31, the intervenors filed a "no objection" comment to the prosecution's "motion for compliance."

It will be recalled that Judge Tita Bughao Alisuag in a ruling issued on June 30, 2016 “side(d) with the intervenors that the disposal and destruction of the wastes will violate equally important environmental laws such as RA 9003 or the Ecological Solid Waste Management Act and RA 9275 or the Clean Water Act.”

The court further ordered the return of 50 container vans of garbage “back to Canada, the place of its origin,” stressing that the Philippines is not a “trash bin” and that the incident ”should not be made a precedent for other  countries to follow.”

The DENR in 2015 had certified that “the contents of the container vans imported by Chronic Plastics are bailed municipal wastes or garbage for immediate local disposal and cannot be recycled.”

“Nine months have passed since the June 30 court order was issued, and the reeking wastes from Canada are still in our territory.  The prolonged delay in the execution of the directive is totally upsetting and unfair for our nation, which is bearing the brunt of illegal and unethical waste trade,” said Dr. Leah Paquiz, representative of the Ang Nars Party-List in the 16th Congress.

Lawyer Amang Mejia, counsel of the EcoWaste Coalition and the other intervenors, reiterated the legal responsibility of the defendants to cause the re-export of Canadian garbage to its source in accordance with R.A. 6969.

Section 14 (Criminal Offenses and Penalties) of R.A. 6969 states that: “the person or firm responsible or connected with the bringing or importation into the country of hazardous or nuclear wastes shall be under obligation to transport or send back said prohibited wastes.”

“As the defendants did not contest the court order within the period provided under the Rules of Court, they have no recourse but to remove the illegal garbage from our soil and to return the same to Canada for environmentally-sound disposal,” he said.

A total of 103 shipping containers of mostly residual garbage from Canada disguised as scrap plastics for recycling arrived in Manila ports in 2013-2014 and intercepted by the customs authorities.

Twenty six of these garbage-filled containers were illegally disposed of in 2015 at the privately-run Metro Clark landfill in Capas, Tarlac angering local government officials and residents.