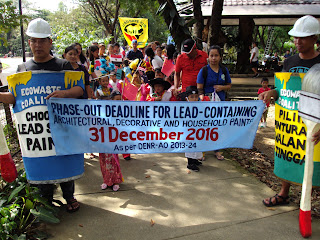 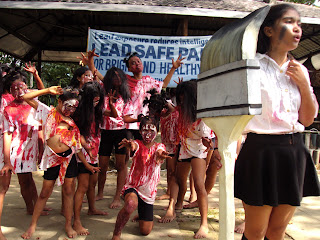 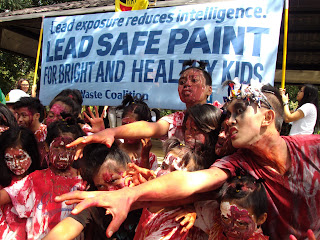 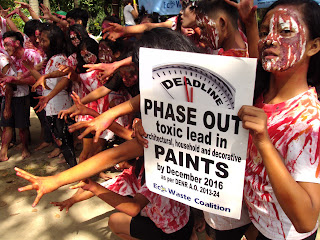 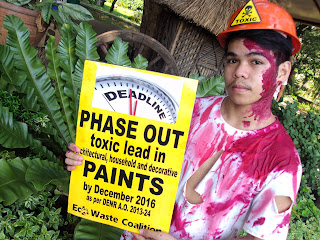 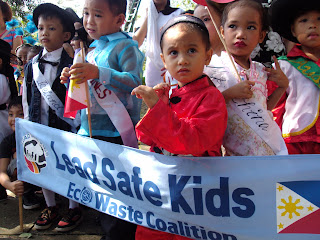 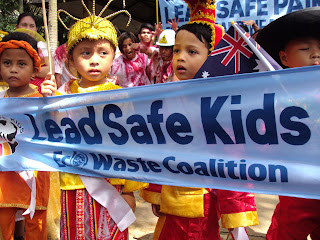 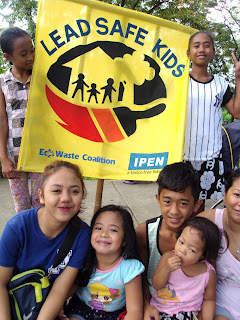 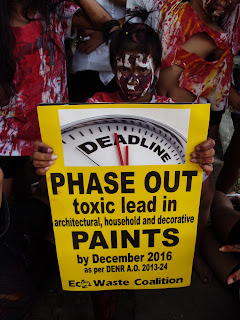 Kids and adults for a lead-safe future today assembled in Quezon City for a “Zombie Run” to mark the 10-week countdown to the December 31 phase-out deadline for lead-containing architectural, decorative and household (ADH) paints in the Philippines.

The activity was part of the worldwide commemoration of the International Lead Poisoning Prevention Week of Action (ILPPWA), October 23 -29, 2016, co-led by the United Nations Environment Programme (UNEP) and the World Health Organization (WHO).

“With the deadline for the removal of lead-added ADH paints just 10 weeks away, we call upon all stakeholders, particularly paint manufacturers, distributors, sellers and consumers, to rally behind this historic target that will remove a common source of lead exposure in our children’s environment,” said Aileen Lucero, National Coordinator, EcoWaste Coalition.

“After a three-year phase-out period that began in 2013, paint companies should have completed or nearly completed by now their switch to non-lead  production for the ADH segment of their product line,” she added.

“The paint industry represented by the Philippine Association of Paint Manufacturers and the government led by the Department of Environment and Natural Resources are one with the civil society in guaranteeing that the phase-out deadline is faithfully enforced,” she acknowledged.

As the mandatory phase-out for lead-containing ADH paints has entered crunch time, the EcoWaste Coalition held the “Zombie Run” at the Quezon Memorial Circle to emphasize the urgency of abiding by the fast-approaching deadline.

Inspired by the “Walking Dead” TV series, youths dressed up as toxic Zombies performed a “Walking Lead” number to the tune of the all-time hit “Thriller” as kids and their parents ran for their health and safety.

At the finish line, the toxic lead Zombies dropped dead to signify that the production, distribution, sale and use of ADH paints in the Philippines is over as spectators clapped in jubilation.

Among the groups who took part were the Check Skill Crew, Piglas Kababaihan at Kabataan, Malaya, ROTCHNA Day Care Center and other EcoWaste partners.

Sara Brosche, Global Lead Paint Elimination Project Manager of IPEN, an international civil society network promoting safe chemicals policies and practices that includes the EcoWaste Coalition, noted  that “children – especially those under 6 years of age – ingest or inhale lead through exposure to dust or soil contaminated with lead-based paint and normal hand-to-mouth behavior or when they chew on toys, household furniture or other articles painted with lead paint.  It is therefore important to remove sources of lead in children’s environment such as ADH paints.”

The drive to ensure industrial compliance to eliminate lead paints as directed by the DENR Administrative Order 2013-24 has garnered support from some of the nation’s influential leaders.

Vice President Leni Robredo through a message sent to the group said: “We trust that as this event progresses, more will be made aware of the perils of lead-containing paint and the industry leaders will make effort to stay away from such hazardous material.”

Sen. Hontiveros, who chairs the Senate Committee on Health and Demography, urged paint companies to make certain that lead-containing ADH paints are taken off store shelves on or before the phase-out deadline.  “This will require paint companies to roll out a well-communicated and systematic system for retrieving such products to ensure that these are not sold at bargain prices, donated to homes, schools and marginalized sectors or unsafely disposed of.”

“Also, I appeal to paint manufacturers to have their paint products independently certifies as lead-safe via a third party certification body to help consumers distinguish between compliant and non-compliant products and avoid lead paint hazards,” the senator added.

Rep. Tan, who chairs the Committee on Health of the House of Representatives, said “endeavors to heighten public awareness on the health hazards of lead need to be sustained and scaled up to prevent causing further damage to health of the next generation.”

In a  statement prepared for this year’s ILPPWA, Dr Maria Neira Director of the Department of Public Health, Environmental and Social Determinants of Health for the World Health Organization (WHO) said: “Exposure to lead poses a significant hazard to human health, especially for children. . . There is no need to add lead to paint - safer alternative chemicals can be used.”

“The best way to ensure the availability of lead-safe paint is for countries to put in place laws, regulations or mandatory standards that prohibit the manufacture, import, export, sale or use of lead paint,” the WHO official said.