Government and non-government organizations are observing this year’s International Lead Poisoning Prevention Week of Action with activities geared at minimizing, if not eliminating, preventable sources of human exposure to toxic lead.

First held in 2013, the Week of Action, spearheaded by the United Nations Environment Programme and the World Health Organization, is supported by partners in the Global Alliance to Eliminate Lead Paint, including the US Environmental Protection Agency and IPEN (a civil society network for a toxics-free future).

The observance of the Week of Action in the Philippines began yesterday, October 21, at the “Kamayan para sa Kalikasan” Forum organized by the Green Convergence  at Kamayan Restaurant in Mandaluyong City that highlighted the concerted efforts to phase out lead-containing architectural, decorative and household (ADH) paints by December 31, 2016 in line with Department of Environment and Natural Resources (DENR) Administrative Order 2013-24.

Tomorrow, October 23, the EcoWaste Coalition and its partner community and youth groups will hold a “Zombie Run” at Quezon Memorial Circle to dramatize the need to protect vulnerable groups, particularly children, from lead paint hazards, as well as to press of industry compliance to the looming phase-out deadline for leaded ADH paints.


On October 28, the DENR-EMB through its Environmental Education and Information Division  will conduct an orientation seminar on Lead Poisoning Prevention that is expected to draw attendees from the academe, non-government organizations and civil society groups.

The said seminar will discuss the dangers of lead and lead compounds, which are still prevalent in many paint products today, and the steps being undertaken by the government to address such threats to safeguard public health and the environment.

“Exposure to lead poses a significant hazard to human health, especially for children. The health effects can have a lifelong impact and include damage to body organs, behavioural problems, and impairment to mental and physical development.  WHO lists lead among the top ten chemicals of public health concern, and all countries should take initiatives to control its use,” said Dr. Maria Neira, Director of the Department of Public Health, WHO.

“Lead paint, particularly when used in the home, in schools and on toys, is an important source of lead exposure for children. We know that lead poisoning is entirely preventable,” the WHO official said in a special statement released for the Week of Action.

The International Lead Poisoning Prevention Week of Action this year will be commemorated from October 23 to 29. 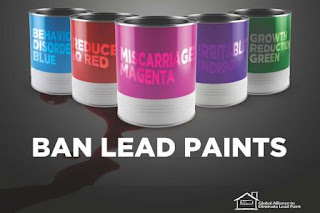