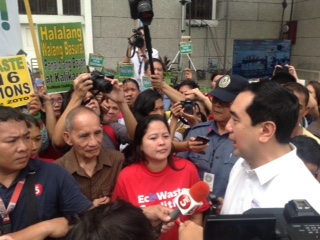 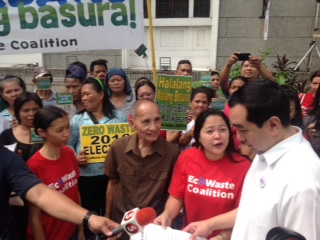 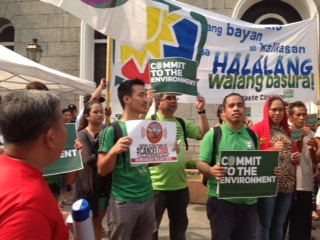 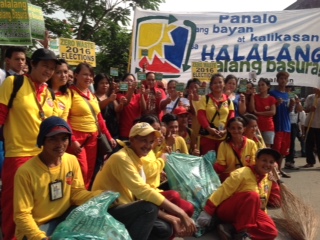 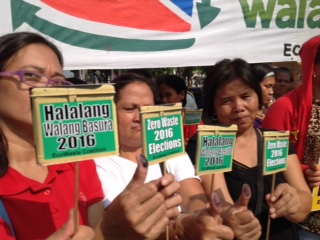 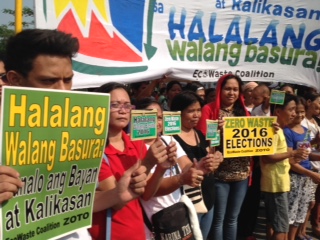 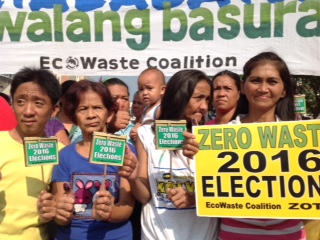 An environmental watchdog group dared the Commission on Elections (COMELEC) and all political wannabes to “green” the electoral campaign as aspirants for elective posts file their certificates of candidacy (COCs) this week.

At a rally held in front of the COMELEC headquarters in Intramuros, the EcoWaste Coalition  urged Chairman Andres Bautista  “to take proactive steps to safeguard not only the sanctity of the ballot,  but also to protect the environment from being degraded further due to  irresponsible campaign activities for the 2016 polls.”

Through a letter, the group requested COMELEC “to exercise its authority to enjoin candidates and their campaign machineries to commit to ‘green’ their campaign and do away with the traditional ‘guns, goons, gold and garbage’ that have long typified our vibrant but ecologically flawed democratic exercise.”

EcoWaste Coalition’s Zero Waste Campaigner Tin Vergara stated that “we need to change the way we conduct our elections as the country’s environment degenerates due to ever increasing resource extraction and pollution from chemicals and wastes.”

“Greening the campaign track from the filing of COCs to post-election cleanup is not rocket science.   What is needed is for the candidates and their backers to turn apathy towards the environment into simple acts of compassion for Mother Earth such as by not littering and burning campaign materials,” she said.

“Instead of the four Gs (guns, goons, gold and garbage), the entire nation should rally behind the three Rs (reduce, reuse , recycle) and make the elections less wasteful and kinder to the environment,” she added.

The group insisted that the COMELEC, with its legal and moral authority, should throw down the gauntlet to presidential bets Binay, Duterte,  Poe, Roxas and other aspiring public servants for them to embrace ecologically-responsible campaign activities that meet the minimum requirements of the country’s electoral, health and environmental laws.

Among the group’s recommendations for the “greening” of the 2016 polls, include updating, re-issuing and enforcing COMELEC Resolution No. 9615, which “encourages parties and candidates to use recyclable and environment-friendly materials and avoid those that contain hazardous chemicals and substances in the production of their campaign and election propaganda.”

The group also urged COMELEC to re-issue the Memorandum Circular on “Basura-Free Elections” that it released along with the Department of Environment and Natural Resources and the Department of Interior and Local Government in 2013 to, among other things, “reduce the amount of generated waste during the campaign, election, and post-election periods.”


The EcoWaste Coalition further submitted a number of other specific proposals for the COMELEC to consider, including:

A. Requiring all individuals and groups running for election to sign a Memorandum of Agreement stipulating the obligation of candidates to comply with lawful and environmentally-friendly campaign practices, including a mandatory post-campaign clean up.

C. Regulating campaign motorcades, if not imposing an outright ban, to address rising problems with traffic congestion, air pollution and climate change, especially in urban centers such as Metro Manila.

“While not legally forbidden, we ask COMELEC to join us in asking all candidates and their supporters to desist from throwing confetti, exploding firecrackers and fireworks and releasing balloons and sky lanterns during their campaign activities for health and safety concerns,” the EcoWaste Coalition said

During the elections held in 2007, 2010 and 2013, the EcoWaste Coalition lamented how the country’s  electoral as well as health and environmental laws were ignored by candidates and their supporters in their efforts to campaign and win.

Some of the more familiar lapses include:

A.  The unchecked use of campaign materials that are seldom reused or recycled such as tarpaulins, posters and buntings, and confetti in campaign rallies.

B.  The uncontrolled plastering of campaign posters outside COMELEC-designated areas, most notoriously on trees, electric posts and walls

C.  The hanging of campaign flaglets, lanterns and streamers in streets and alleys;

D.  The display of “indirect” campaign-related banners such as graduation and fiesta “greetings” and announcements extolling the projects and achievements of politicians;

E.  The unregulated noise from mobile political propaganda and during campaign meetings;

F.  The rampant distribution and littering of sample ballots on election day;

G.  The open burning of campaign waste, which, like littering, is a prohibited act under RA 9003, the Ecological Solid Waste Management Act; and

H.  The massive use of polystyrene containers for drinks and meals served inside the polling centers for members of the Board of Election Inspectors, poll watchers and volunteers, and the lack of an ecological systems for managing discards such as food leftovers and their single-use containers.

I.  The failure to immediately remove campaign materials after the election period.