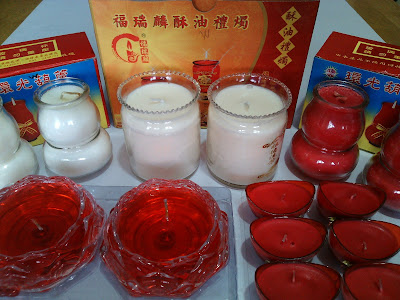 A watchdog group promoting proactive steps to prevent and control lead pollution sources urged the Department of Health (DOH) to stop the continued sale of imported candles with leaded wicks in Manila’s Chinatown.

Through a letter sent last week to Health Secretary Janette Garin, the EcoWaste Coalition asked the DOH through the Food and Drugs Administration, which has jurisdiction over candle products, to immediately ban the manufacture, importation, distribution and sale of candles with lead-containing wicks to safeguard public health.

Unlike locally-made candles that has mostly cotton-based wicks, some gel or paraffin wax Chinese candles contain lead core wicks, which can emit lead fumes during burning, the group told Garin.

Based on the group’s latest test buys, some Chinese candles contain from 17,300 to over 100,000 parts per million (ppm) of lead in the metal core wicks.

“It’s not safe to burn candles with leaded wicks, especially for young children and pregnant women who can be exposed to lead in the smoke and soot,” said Thony Dizon, Coordinator of the EcoWaste Coalition’s Project Protect, stressing that “there is no known level of lead exposure that is considered safe,” according to the World Health Organization (WHO).

“Children are most susceptible to the adverse health effects of exposure to lead,” said Dizon who added that “such exposure can irreparably damage the developing brain of the fetus in the womb and even trigger  miscarriage for pregnant women,” he added.

The group also informed Garin that samples of candles with lead wicks sent by the EcoWaste Coalition to the SGS for laboratory analysis in October 2014 found 207,350 ppm of lead in the composite wicks of the samples.

Candles with lead core wicks had been banned since 1999 in Australia, 2001 in Finland, 2002 in Denmark and 2003 in the USA in to prevent children’s exposure to lead fumes.

In particular, the US Consumer Product Safety Commission (CPSC) has determined that candles with leaded  wicks could pose a lead poisoning hazard to young children, prompting the agency to ban such candles since October 2003.

“The Commission finds that metal-cored candlewicks containing more than 0.06 percent lead by weight (or 600 ppm) in the metal and candles with such wicks are hazardous substances, and that, due to the degree and nature of the hazard presented by these items, in order to protect the public health and safety it is necessary to keep them out of commerce,” the CPSC ruling said.

Subsequent health warning from the US CPSC said that “children may then inhale the vaporized lead, placing them at risk,” adding that “children may also be exposed to lead by mouthing objects on which lead has settled or by handling such objects and then mouthing their hands.”

“We hope that Secretary Garin will heed our appeal and order the ban and removal of dangerous candles with leaded wicks in the market,” Dizon said.

In the meantime, the group urged consumers to choose candles for the upcoming All Saints’ Day and All Souls’ Day with care, advising the public to avoid buying and using candles with metallic core unless certified to be lead-safe, and to patronize locally-made candles that are of good quality and non-toxic.

Unknown said…
ask permission to visit and listen to the article you present here,
Thank you for sharing with me,, I hope you can continue to post articles that more than this.
good luck and keep posting article more nice
visit Obat Herbal Untuk Kanker Kulit
Tuesday, December 01, 2015

Unknown said…
very good article and easy to understand.
thank you for sharing with us, may be useful and we hope you will post another article that more and better.
always success
visit Obat Herbal Kanker Darah

Unknown said…
Thank you for sharing articles were very nice and useful like this ..
we liked it very much, I hope you can post or renew it again.
goos luck,,
visit Obat Herbal Penyakit Leukemia

Unknown said…
Thank you for sharing articles were very nice and useful like this ..
we liked it very much, I hope you can post or renew it again.
goos luck,,
visit Obat Herbal Penyakit Leukemia

Unknown said…
I liked it, I hope you can post or renew it again.
Thank you for sharing articles or information very good.
visit Toko Obat Ace Maxs
Tuesday, December 08, 2015

Unknown said…
How do your activities today? hopefully smooth and fun
Thank you for sharing about the articles and information with us,,
we really liked and listened attentively ..
it is very nice
visit Obat Herbal Kanker Tulang

Unknown said…
thank you for the information you present here,
Keep posting and I really like it.. it is very good
visit Obat Herbal Darah Tinggi
Monday, December 14, 2015

Unknown said…
very good article and interesting, this may be the first step to your success.
Keep posting and updating information or other article,,
Thank you
visit Obat Benjolan Di Belakang Telinga Yang Ampuh
Thursday, December 17, 2015

Hello sir, after I read the article you get to the bottom, It is very interesting to look at, it can provide benefits, and also the lessons, I really like it. so that I can remember with this master page and be back here, I leave a trail so that I could track my trail I have ever visit
obat herbal untuk kutil kelamin dari de nature
cara mengobati kutil kelamin
jual obat untuk penyakit kelamin
obat gonore kencing nanah
kencing nanah dan cara mengobatinya
kencing terasa sakit dan perih apakah ada obatnya
cara mengobati kencing nanah/ gonore
dimana bisa beli obat kencing keluar nanah
toko obat yang menjual obat gonore
obat kencing nanah di medan