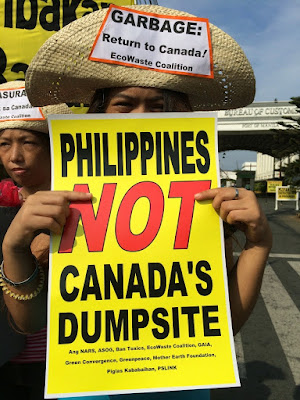 Environmental groups welcomed the statement made by the chief executive of Bulacan saying that the dumping of illegally imported trash from Canada will not be allowed in local landfills.

The Sagip Sierra Madre Environmental Society, Inc. and the EcoWaste Coalition cited Governor Wilhelmino Sy-Alvarado for disallowing the use of landfill facilities in Norzagaray and Obando, Bulacan for the controversial garbage imports from Canada after Tarlac barred their further disposal in Capas landfill.

“It will be totally disrespectful and outrageous  if Canada’s garbage is sent to Bulacan for disposal.  Governor Alvarado is right in rejecting such a move,” said Bro. Martin Francisco, Chairperson of the Sagip Sierra Madre Environmental Society, Inc.

“The people of Bulacan fervently pray that such rejection would be permanent and would apply to all imported trash,” he added.

Aileen Lucero, Coordinator of the EcoWaste Coalition, said that “Bulacan and other provinces hosting waste disposal facilities should not be saddled with garbage illegally brought to our shores that could pose health risks to our workers and communities.”

“Like what the Tarlac Provincial Board did, we hope that Bulacan and other concerned local government units (LGUs) will adopt formal declarations and measures prohibiting the disposal of foreign wastes into their territories,” she suggested.

“As Bulacan is home to major cement factories, it’s necessary for such a ban to cover the use of foreign wastes as alternative fuels for cement kilns,” she said.

Citing Section 16 of Republic Act 7160 (Local Government Code), Lucero said that “every LGU shall exercise the powers…which are essential to the promotion of the general welfare.”

R.A. 7160 further provides that “within their respective territorial jurisdictions, LGUs shall… promote health and safety (and) enhance the right of the people to a balanced ecology.”