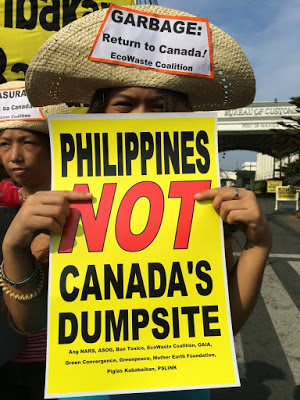 Five environmental, labor and party list groups, including private individuals, have joined forces to ensure the return of the illegal garbage imported from Canada to its origin in accordance with national and international laws.

The EcoWaste Coalition, Global Alliance for Incinerator Alternatives, Public Services Labor Confederation, Sentro ng  mga Nagkakaisa at Progresibong Manggagawa and Ang NARS  Party-list, and private individuals, have filed a motion to intervene in a criminal case filed against the importer and customs brokers of the Canadian garbage for violation of Republic Act 6969, the Toxic Substances and Hazardous and Nuclear Wastes Control Act.

The groups are seeking the court's permission to be allowed to intervene in the case to enforce the obligation of the accused to return the illegal trash imports pursuant to R.A. 6969.

The groups filed their motion for intervention, along with the complaint-in-intervention, on July 22 with Branch 1 of the Regional Trial Court of Manila.  The first hearing is set on August 19.

The groups intervened “to prevent the further dumping of the illegal trash imports in the country and for the imported garbage to be sent back to Canada in line with R.A. 6969 and the Basel Convention, especially since there were moves from the prosecutor and the owner of the container vans to allow the disposition of the garbage locally," explained Rene Pineda of the EcoWaste Coalition, one of the intervenors.

“We fear that such moves will gravely affect the health of the populace and the environment,” he said.

"Once we are part of the case and with the help of the court, we hope to make sure that the executive agencies, particularly the Bureau of Customs, the Department of Environment and Natural Resources, and the Department of Foreign Affairs will be transparent on their actions and more importantly ensure that no more imported trash from Canada will be disposed of anywhere in the country," he added.

The intervening groups and individuals believed that their collective action to oppose foreign waste disposal into the national territory is in accordance with Sections 15 and 16 of Article 2 of the 1987 Constitution.

Allowing the disposal of Canada’s garbage in local landfills or other facilities will undoubtedly set a very bad example that will put human and ecological health at risk and should be resisted,  the intervenors said.

Meanwhile, senior statesman Aquilino “Nene” Pimentel Jr., former Senate president, recently stated that “the Philippines is not a garbage dump of Canada or any country for that matter.”

“Tarlac government units are right and they should be commended for asserting their constituents’ human right to clean air and environment,” he said.

Pimentel was referring to the successful action by the Tarlac local authorities to investigate and stop the further dumping of Canadian trash in the town of Capas.