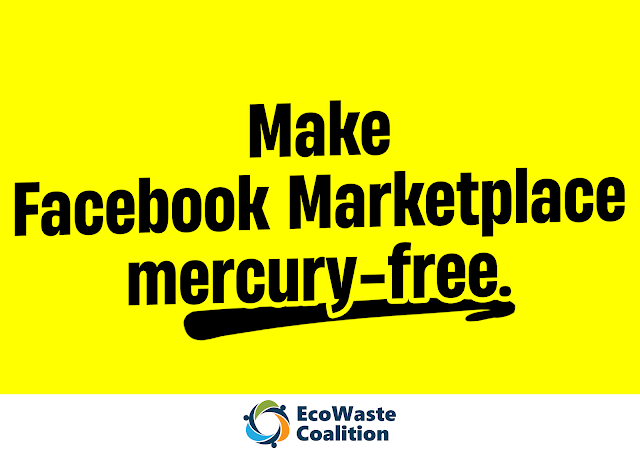 The toxics watchdog group EcoWaste Coalition today submitted a letter urging the management of Facebook Philippines to take immediate action to make the FB Marketplace safe from mercury-containing cosmetic products.
In a letter addressed to John Rubio, Country Director for FB Philippines, the group reported the inappropriate use of FB Marketplace to buy and sell unauthorized cosmetics, particularly skin whitening creams containing mercury, a potent neurotoxin banned as an ingredient in cosmetic products.
According to the monitoring conducted by the group, “there are dozens of advertisements on FB Marketplace for skincare cosmetics that have been warned by the Food and Drug Administration (FDA) for containing violative levels of mercury and/or for lacking the required market authorization.”
“We appeal to your office to take immediate action that will result in the permanent removal of listings for FDA-warned cosmetics in the Facebook Marketplace, the rejection of product tags for such cosmetics, and the suspension or termination of non-compliant accounts promoting the buying or selling of unauthorized or banned cosmetics, especially targeting skin lightening products laden with mercury and other hazardous chemicals,” said Aileen Lucero, National Coordinator, EcoWaste Coalition.  “Please make the FB Marketplace mercury-free.”
“We believe that Facebook does not condone this practice, which is in violation of its Community Standards and Guidelines,” she said. “We also understand that Facebook has been investing in people, as well as Artificial Intelligence, to make the massively popular platform safe from harmful content, products and services.”
Among the FDA-warned cosmetics being offered for sale at FB Marketplace are illegally imported Collagen Plus Vit E, Erna, Golden Pearl, Goree, Jiaoli and S’Zitang skin lightening products, the group reported.
To illustrate how contaminated these FDA-warned cosmetics are, the EcoWaste Coalition shared with Facebook the results of the recent tests conducted by the Wonjin Institute for Occupational and Environmental Health (WIOEH) for samples procured by the group from offline and online retailers.
For example, Goree Day & Night Beauty Cream, Goree Beauty Cream with Lycopene and Golden Pearl Beauty Cream were found to contain a whopping 58,400 parts per million (ppm), 46,900 ppm and 15,600 ppm of mercury, respectively, way above the 1 ppm limit.
Mercury is highly toxic to the health of human beings. To protect public health, as well as the environment, from mercury exposure, the Minamata Convention on Mercury phased out in 2020 the manufacture, import and export of cosmetics such as skin lightening creams and soaps with mercury content above 1 ppm.
Prior to the entry into force of the said treaty, the ASEAN Cosmetic Directive in 2007 listed mercury and its compounds among the substances not allowed in the composition of cosmetic products. However, the illegal production and trade of mercury-containing skin lightening products persists despite the global thrust of eliminating mercury in cosmetics.
“Facebook’s action will contribute to the protection of human health and the environment from the adverse effects of exposure to mercury, and safeguard the well-being of digital consumers, especially the members of the FB Community,” the EcoWaste Coalition said.
The EcoWaste Coalition is a non-profit environmental health organization working toward a zero waste and toxics-free society.  One of its program priorities is the promotion of public awareness and safety against hazardous chemicals in products such as mercury in skin lightening cosmetics, which may put the health of consumers, especially women of child-bearing age, at grave risk.
Email Post