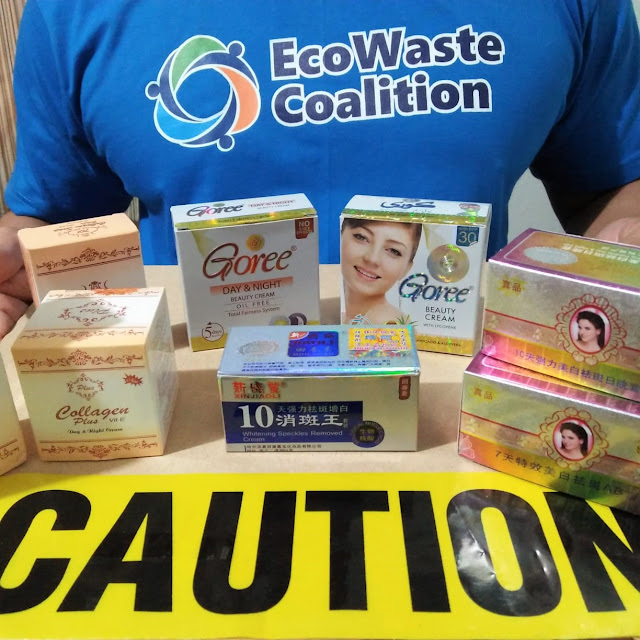 The toxics watchdog group EcoWaste Coalition is urging newly-installed Iligan City Mayor Frederick Siao to take immediate action to stop the sale of mercury tainted cosmetics in the city.
“As one of the vocal politicians  at the 18th Congress who took a strong stance against the South Korean waste dumping in Northern Mindanao, we believe that Congressman-turned Mayor Siao will act swiftly to protect his constituents against contraband cosmetics laced with mercury, a highly toxic chemical,” said Aileen Lucero, National Coordinator, EcoWaste Coalition.
“While not as headline-grabbing as the 7,408 metric tons of contaminated plastic waste from Korea, the sale in Iligan City of these dangerous cosmetics loaded with mercury poses a real threat to the health and safety of Iliganons and should be dealt with immediately,” she said.
“To protect Iliganons, especially women and girls, from this preventable source of mercury exposure, request Mayor Siao to form a quick response team to solve this problem within the first 100 days of his administration,” she said.
Aside from confiscating the violative products and ensuring their safe disposal, the EcoWaste Coalition is proposing the passage of an ordinance banning and penalizing the manufacture, importation, distribution and sale of mercury-containing cosmetics in Iligan City.
“The constitutionally-guaranteed right of the people to health and the Minamata Convention-directed phase-out in 2020 of cosmetics with mercury above 1 ppm provide a strong justification for local authorities to enact such an ordinance,” Lucero pointed out.
In test buys conducted last June 22, the group procured imported facial creams costing P125 to P300 each mostly from beauty product stores located in the city proper. The items bought are among the cosmetics banned by the Food and Drug Administration (FDA) for lacking the required market authorization and/or for containing mercury above the allowable limit of one part per million (ppm).
Among the items purchased were Collagen Plus Vit E Day & Night Cream, Goree Beauty Cream with Lycopene, Goree Day & Night Beauty Cream, S’Zitang 7-Day Specific Eliminating Freckle AB Set, S’Zitang 10-Day Eliminating Freckle Day & Night Set, and Xinjiaoli Whitening Speckles Removed Cream.
Based on the chemical screening carried out by the EcoWaste Coalition using an X-Ray Fluorescence (XRF) device, the facial creams were found to contain mercury ranging from 1,154 to 28,660 ppm, exceeding the 1 ppm limit.
Exposure to mercury in skin whitening cosmetics may lead to skin discoloration, rashes and scarring and decreased skin’s resistance to bacterial and fungal infections.  It may also cause damage to the kidneys, gastrointestinal tract and the nervous system.
Users, as well as non-users, are exposed to mercury in skin lightening cosmetics via dermal absorption, inhalation of mercury vapors, and ingestion.
According to the EcoWaste Coalition, the safest way for Iliganons to protect themselves is not to use chemical whiteners and to accept their skin tone, stressing that "natural is beautiful."
References:
Email Post