On the eve of a historic United Nations Environment Assembly (UNEA), the EcoWaste Coalition reiterated its unity with the global plea urging delegates to agree to negotiate for a strong treaty with binding controls and targets that will end the toxic threat and injustice from the plastic wastes and pollutants plaguing the world.
As the second session of the fifth UNEA (UNEA-5.2) resumes on February 28 to March 2 in Kenya, Nairobi on hybrid format, members of the EcoWaste Coalition gathered in Quezon City to remind government delegates of the “make or break” opportunity to negotiate for a legally binding agreement to prevent and remedy plastic pollution and its  toxic impacts.
“We appeal to the UNEA government delegates  to decide in favor of a strong legally binding global instrument that will prevent, reduce and remediate harms from the whole life-cycle of plastic,” said Aileen Lucero, National Coordinator, EcoWaste Coalition, stressing plastic is not just a simple litter problem, but a complex environmental, health, justice and climate issue, especially since 99 percent of plastic are derived from fossil fuels.
“To make this happen, UNEA must agree on a robust mandate for an intergovernmental negotiating committee to end the flow of plastics and their toxic chemical additives into the oceans and the rest of the natural environment, the food chain and even our bodies,” she emphasized, lamenting that up to 12 million metric tons of plastic are poured into the oceans each year.
“While we are not physically present in Kenya, we link arms with Break Free From Plastic (BFFP), Global Alliance for Incinerator Alternatives (GAIA), International Pollutants Elimination Network (IPEN) and other esteemed civil society groups in fighting for a strong plastics treaty every step of the journey,” she added. 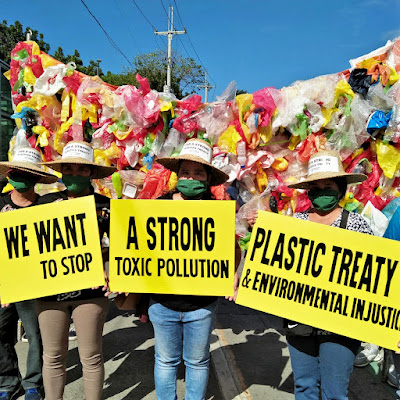 To drive their message home, the green activists stood in silence while holding wooden placards that sum up their plea for action: “We want a strong plastics treaty to stop toxic pollution and environmental injustice.”  One activist brandished a placard that reads: “Strong plastics treaty for a genuinely circular and non-toxics future.”
A collage of disposable plastics and other plastic products, including plastic bags, bottles, containers, bubble wrap and other packaging materials, as well as other plastic products containing toxic chemical additives served as backdrop for their action.
Among the hazardous substances making up plastics are polybrominated diphenyl ethers (PBDEs) and other flame retardant chemicals, phthalate plasticizers, grease, water and heat resistant per- and polyfluoroalkyl substances (PFAS), UV-328 and other ultraviolet stabilizers, heavy metals such as cadmium and lead, and many other toxic additives that can leach into food, soil and water.
“Plastics containing toxic chemicals that pose hazards to human health and the environment should not be manufactured and recycled into the economy.  Like in the case of the ubiquitous single-use plastics (SUPs), the world needs to act decisively to phase them out as recycling will not solve this toxic problem,” the EcoWaste Coalition said.
As stated by Inger Andersen, Executive Director of the UN Environment Programme (UNEP):  "We need a system change that addresses the full cycle of plastics.  We need to be innovative and eliminate products that are unnecessary, avoidable or problematic.  Design products for reuse and recycling and ensure this happens.  Remove hazardous additives.  By doing this we could reduce the volume of plastics entering our oceans by over 80 per cent by 2040 and reduce virgin plastic production by 55 per cent.  We could reduce greenhouse gas emissions by 25 per cent and create 700,000 additional jobs, mainly in the global south."
According to studies, some 400 million tons of plastic are manufactured every year with only less than 10 percent recycled.  The rest ends up being incinerated, landfilled or dumped into the rivers and the oceans.  In the Philippines, SUPs and plastics with undisclosed toxic chemical additives proliferate due to the lack of national laws banning or restricting them, and the failure to hold manufacturers responsible for the ensuing pollution.  The unprecedented plastic waste crisis has led to regressive, quick-fix "solutions," including schemes promoting waste-to-energy incineration.
Without an ambitious and comprehensive global agreement on preventive and remediation measures, the plastic pollution crisis in the Philippines and across the globe is set to get even worse as the production of plastics, along with their toxic additives, is expected to double within the next two decades.
References:
Email Post