EcoWaste Coalition: Shun Dirty and Toxic Practices to Ring In the New Year 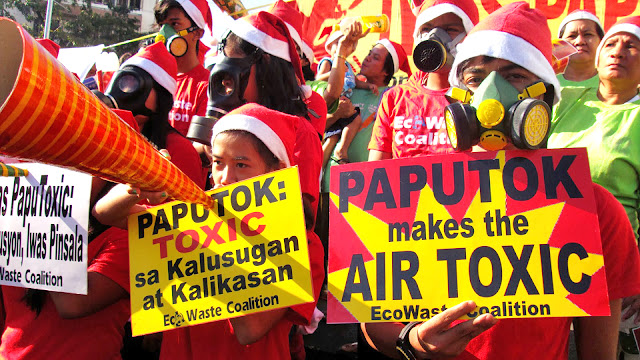 With New Year just around the corner, an environmental health organization reminded the general public to stay away from practices that tend to contaminate the environment with chemical and waste pollutants causing ill health.
In a bid to lessen the pollution associated with the boisterous New Year festivities, the EcoWaste Coalition appealed to the public not to ignite firecrackers and fireworks, burn garbage and used tires, light sky lanterns, and release balloons during the merrymaking.
“We encourage all households, local governments and business establishments to keep the New Year’s celebrations as ecological and safe as possible.  In the face of the health, climate and plastic crisis, we are called to shun practices that squander resources and pollute the environment with wastes and toxins,” said Thony Dizon, Chemical Safety Campaigner, EcoWaste Coalition.
“The cry for help from typhoon Odette-battered communities should dissuade us from engaging in wasteful activities to ring in the New Year.  Funds for firecrackers and fireworks, lavish parties, too much booze and other non-essentials like balloons and sky lanterns are better shared with groups and individuals working with the survivors in rebuilding their lives,” he added.
The group explained that igniting firecrackers and fireworks release minuscule pollutants affecting air quality and posing health hazards, especially among children, pregnant women, the elderly, and persons with cardiovascular, neurological and respiratory conditions.
According to the Department of Health (DOH), “the levels of suspended particulate matters, carbon monoxide, nitrogen oxide, sulfur dioxide, hydrocarbons, increase to unprecedented levels in air during fireworks displays,” which can lead to a variety of health problems, including respiratory ailments such as chronic or allergic bronchitis, bronchial asthma, laryngitis, pneumonia, rhinitis, and sinusitis.  Also, firecrackers and fireworks generate loud sounds that can be stressful and traumatic for cats and dogs, which are gifted with a highly sensitive sense of hearing.
The incineration of garbage and used tires during or after the New Year’s Eve countdown, the group warned, can contaminate the environment with persistent organic pollutants (POPs), particularly dioxins.  The World Health Organization describes dioxins as “highly toxic,” and “can cause reproductive and developmental problems, damage the immune system, interfere with hormones and also cause cancer.”
The group also advised against the release of balloons or sky lanterns on New Year’s Eve as these will eventually turn into dangerous marine litter that can harm aquatic animals who mistakenly eat them or get entangled in balloon strings or lantern frames.  Sky lanterns, the group also pointed out, may cause structural fires and wildfires, particularly when a lantern drops to the ground when the flame is still alight.
The group likewise appealed to those who will welcome the New Year in public areas such as the Rizal Park, Quezon Memorial Circle and other recreational sites not to abandon any garbage for cleaners to pick up, particularly food leftovers and wrappers, empty plastic bags, used plastic bottles and cups, and used face masks.
For an eco-friendly and safer New Year celebrations, Dizon urged the public to support the DOH's "Ligtas Christmas para sa Healthy Pilipinas" drive, which includes the EcoWaste Coalition.
The EcoWaste Coalition further encouraged the public to heed these timely reminders from the group:
Finally, the group reiterated the importance of observing basic protective measures (washing or sanitizing hands, wearing face masks and physical distancing) to keep COVID-19 from spreading during the year-end festivities.
References:
Email Post