Groups: Give Priority to Zero Waste Strategies to Prevent the Release of Persistent Organic Pollutants (POPs) 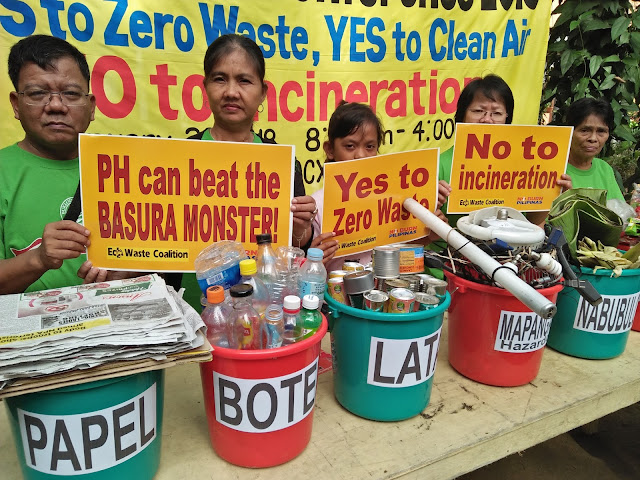 The EcoWaste Coalition, Interfacing Development Interventions for Sustainability (IDIS) and Mother Earth Foundation (MEF) together made the call in observance of the 17th anniversary of the entry into force of the Stockholm Convention on POPs last May 17, 2004.
The treaty, which counts on the among its state parties, seeks to protect human health and the environment from POPs through a range of measures aimed at reducing and eventually eliminating their releases to the environment. Among these POPs are unintentionally produced pollutants such as dioxins and furans resulting from combustion and industrial processes, including the open burning of trash, the incineration of municipal, medical and hazardous wastes, and cement kilns firing hazardous waste.
“We call upon the as party to this treaty addressing global chemical pollution to prioritize zero waste strategies that are proven effective in preventing the formation and release of unintentional POPs, as well as greenhouse gas (GHG) and mercury emissions,” said Thony Dizon, Chemical Safety Campaigner, EcoWaste Coalition. “While lauding the concerted multisectoral efforts dealing with POPs polychlorinated biphenyls (PCBs) and polybrominated diphenyl ethers (PBDEs), we also would like to find out where we are in terms of updating and putting our National Implementation Plan on all POPs into operation as part of the country’s strategy toward sustainable development."

“In lieu of waste-to-energy incineration that is disturbingly being pushed in both houses of the 18th Congress and in some localities, we appeal to decision makers to divert their attention to mainstreaming zero waste strategies and action plans, with adequate budget support, to counter proposals to construct costly landfills and incinerators for burying or burning wastes,” said Atty. Mark Peñalver, Executive Director, IDIS.
Promoting zero waste strategies -- not the repeal of the incineration ban under the Clean Air Act (RA 8749) and the Ecological Solid Waste Management Act (RA 9003) – must form part of nation’s priority efforts to recover from the dire impacts of the COVID-19 pandemic on people’s health and livelihoods, the groups insisted.
According to the International Pollutants Elimination Network (IPEN), which includes the EcoWaste Coalition, IDIS and MEF among its members, “POPs are recognized as a serious, global threat to human health and to ecosystems.”
POPs can remain intact in the environment for long periods of time, can travel great distances through air and water, can bio-accumulate in the food chain and can have adverse effects on human health and the environment.
Highly toxic to both humans and wildlife, exposure to POPs has been linked to the disruption of the immune system, neurological disorders, reproductive abnormalities, cancers and other diseases.
A living treaty where new POPs are added following rigorous review procedures, the Stockholm Convention started with an initial list of “dirty dozen” POPs. Currently, there are 30 POPs listed.