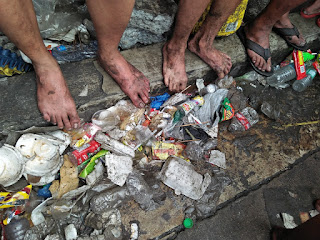 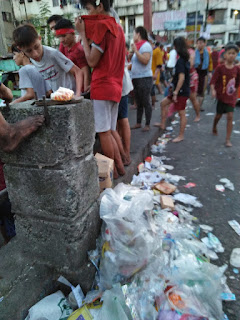 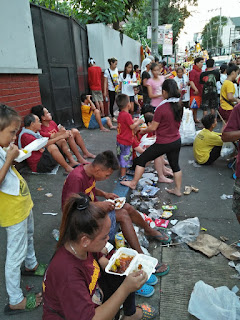 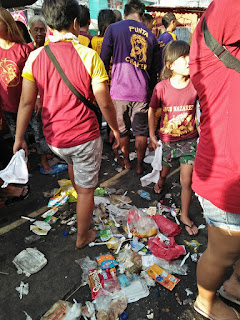 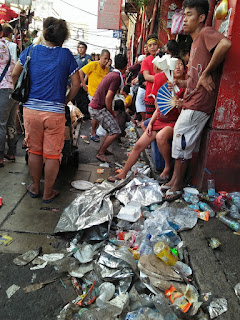 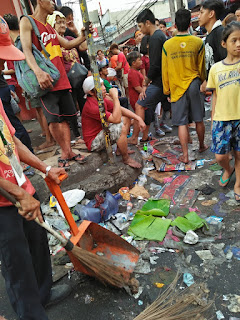 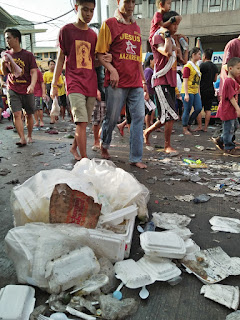 (Photos taken by the EcoWaste Coalition's Basura Patrollers on January 9, 2018 in Quiapo, Manila.)


With the much-anticipated re-enactment of the “Traslacion” just a few weeks away, a waste and pollution watchdog made an early appeal to millions of Black Nazarene devotees to aim for a trash-free celebration.

The EcoWaste Coalition, a waste and pollution watch group, urged the millions of Catholic faithful who are expected to take part in the mammoth procession  on January 9 commemorating the transfer of the venerated image of the Black Nazarene from Luneta to Quiapo to take waste prevention seriously.

“We appeal to the devotees of the Black Nazarene to take waste prevention to heart as they fulfill their religious vows.  Let it not be said that the age-old Traslacion has again turned into a ‘trash-lacion’ sullying every nook and corner of the processional route with garbage,” said Daniel Alejandre, Zero Waste Campaigner, EcoWaste Coalition.

Citing data from the Manila City Government, the group lamented that 385 tons of mixed garbage were collected by government personnel and volunteers from Quirino Grandstand in to the Quiapo district during the traditional “Pahalik” and procession in 2018.  This figure is 11% higher than the 341 tons of garbage collected during the 2017 Traslacion.

Year in and year out, the feast of the Black Nazarene is besmirched by tons of mixed garbage abandoned on the streets and sidewalks of the city of , especially at and the roads and barangays where the six-kilometer procession will traverse through.

“As next year is election year, we appeal to all politicos and their supporters not to use the Traslacion to popularize their names and to add more garbage to the occasion,” stated Alejandre.

Specifically, the group asked politicians, political parties and party list groups not to put up tarpaulin banners and distribute campaign leaflets to the huge crowd that is expected to join the Traslacion.

“Tarpaulitics,” or the unrestrained use of tarpaulins to publicize candidates’ names and faces, is not the way to earn the support of the electorate, the EcoWaste Coalition emphasized.

“We also encourage well-meaning individuals and groups to offer devotees with food and water in reusable containers and not in single-use plastic or paper containers, which are hardly retrieved and recycled,” added Alejandre.
As January is also marked as the “Zero Waste Month,” the group appealed to the Parish of Saint John the Baptist (Quiapo Church), Archdiocese of Manila, Manila City Government, Metro Manila Development Authority, the concerned barangays and civil society groups to work together to make next-year’s Traslacion trash-free.

“The objective should not simply focus on how quick the garbage is swept, collected and hauled, but on how the generation of garbage can be prevented and reduced to the minimum,” said Alejandre.