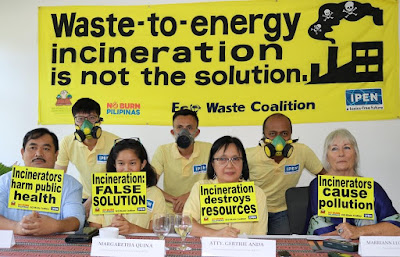 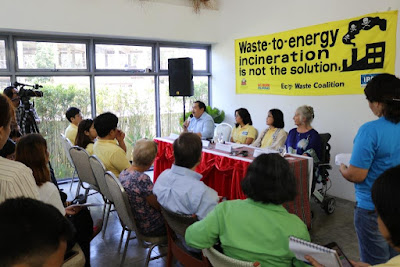 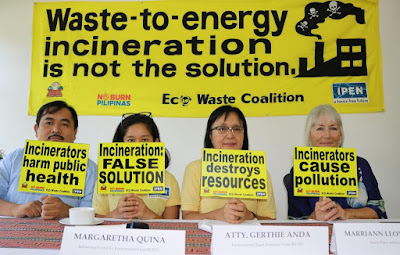 
At a press conference coinciding with the observance of the World Environment Day, environmental advocates from Australia, Indonesia and the Philippines made a strong case against waste-to-energy (WtE) incineration touted as a solution to the garbage crisis.

Organized by the Environmental Legal Assistance Center (ELAC), EcoWaste Coalition and IPEN*, the press event shed light on the pitfalls of incinerating discards from an environmental, health and socio-economic standpoint.

“This event is being held against a backdrop of increasing concern over the plan of the Puerto Princesa City government to put up a P2.1 billion WtE gasification plan that will burn the city’s discards estimated at 100 metric tons per day,” said Atty. Gerthie Mayo-Anda, Executive Director, ELAC.  “We hope the city government will hear us out, rethink its plan and opt for holistic waste prevention and reduction strategies to cut the volume of discards requiring final disposal.”
Speaking at the press conference, IPEN Senior Advisor Mariann Lloyd Smith, PhD (Law), from Australia sounded the alarm over highly hazardous pollutants from waste incineration that can threaten human health and the environment.

"WtE incineration emits a wide range of toxic and hazardous air pollutants. These include heavy metals and nanoparticles as well as persistent organic pollutants (POPs) such as dioxins and furans (PCDD/DF). These extremely toxic substances are subject to the Stockholm Convention on POPs, a U.N. treaty for the worst of the world's hazardous chemicals,” said Lloyd-Smith.

The Stockholm Convention, of which the Philippines is a state party, acknowledges that the incineration of municipal or hazardous waste is a prime source for these unwanted POPs and signatories to the Convention, are obliged to reduce and where possible, eliminate POP chemicals.

“In WtE incineration, once these POP contaminants are formed, they are either released to air or are captured in the ash. The stockpiles of toxic ash generated leave a legacy of hazardous waste that must be managed for generations to come,” Lloyd-Smith explained.

Earlier this year in Australia, the State Government's Department of Health and the Environmental Protection Authority strongly advised that the proposed WtE incineration facility in Western Sydney not to go ahead, citing air quality impacts and risks to human health.

For her part, lawyer Margaretha Quina,  Head of the Environmental Pollution Division, Indonesian Center for Environmental Law, said: “ We've seen cases around the globe litigating the impacts of pollution, especially toxics pollutants, associated with thermal WtE plants. We don't want, and don't need, to have irreversible impacts occurring in our countries to have governments convinced that these are harmful investments.”

“In Indonesia, a Supreme Court decision in late 2016 struck down our central government's policy to accelerate thermal WtE plants in seven cities. One of the grounds cited by the court was the arbitrariness of the decision to accelerate without sufficient environmental safeguards and the development of a high-risk activity in densely populated areas,” she said.

“Puerto Princesa  City government should be aware that given the environmental risks exposing the communities, thermal WtE is not a sound choice and is prone to litigation," Quina emphasized.

Ruel Cabile, anti-WtE campaigner of the EcoWaste Coalition reported that No Burn Pilipinas, an alliance of over 50 civil society groups, has written to Mayor Lucilo Bayron requesting his office “to heed the Philippine ban on waste incineration, and pursue zero waste as the sustainable approach to managing the city’s discards.”

“We have called on Mayor Bayron to do the right thing and protect public health and the environment from the dangers of waste incineration by embracing zero waste management solution,” he said.

*IPEN is a global network of over 500 public interest NGOs in 125 countries working for a toxics-free future.
Email Post

williambli92982 said…
Spot on with this write-up, I truly think this website needs rather more consideration. I’ll most likely be once more to learn much more, thanks for that info. online casino real money
Thursday, November 01, 2018

nikkisa889 said…
Good post. I be taught something tougher on totally different blogs everyday. It will all the time be stimulating to read content material from different writers and practice a bit of something from their store. I’d favor to use some with the content material on my weblog whether or not you don’t mind. Natually I’ll offer you a hyperlink in your net blog. Thanks for sharing. online casinos
Tuesday, October 29, 2019