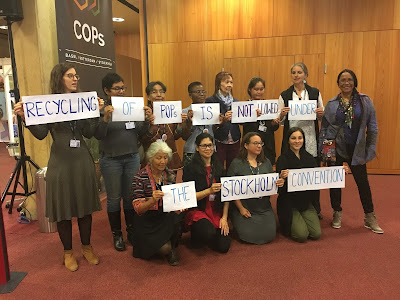 Geneva, 1 May 2017: Today at the 8th Conference of Parties of the Stockholm Convention on Persistent Organic Pollutants (POPs), governments rushed thru decisions to list two toxic chemicals, but provided extraordinary loopholes that permit all uses of them. The chemicals are DecaBDE, a flame retardant commonly found in electronic waste, and SCCPs, an industrial chemical used in metal working and as a flame retardant in plastics.1 Both chemicals are persistent, highly toxic, travel long distances and build up in the food chain. Recent IPEN studies found both substances widely present in children’s toys.2

Extraordinary exemption time periods
The time periods for these loopholes are unprecedented. For example, DecaBDE use is allowed in new cars and spare parts for almost 20 years until 2036. In contrast, the treaty specifies a five-year period for specific exemptions. The language permitting DecaBDE in aircraft cleverly hides the fact that manufacturing will likely continue until 2050 and use until 2100. Boeing clearly stated that this exemption was not needed, and it appears that it was pushed on behalf of the EU aerospace industry.

Extensive number of loopholes
The Convention’s expert committee carefully evaluated these substances and proposed only one exemption for DecaBDE for use in auto spare parts. However, COP8 granted a long of list of exemption loopholes that were not recommended due to the availability of alternatives. Fortunately, a proposal by two countries to grant a polluting recycling exemption for DecaBDE was rejected. Governments granted numerous loopholes for SCCPs use even though the expert committee did not recommend any of them.

“This decision is personal for me,” said Pam Miller, IPEN Co-Chair and Arctic investigator. “I grew up near a major SCCPs manufacturer. They polluted the entire area and the community turned into a cancer cluster.”

No labeling
Developing and transition countries will not be able to easily comply with treaty requirements on wastes because a small group of countries rejected proposals to at least label new products containing the substances. Consumers concerned about contaminated products will have no information about their content.

“Country and consumer right-to-know is a fundamental principle of chemical safety,” said Dr. Olga Speranskaya, IPEN Co-Chair. “Consumers will unknowingly buy and expose their children to these chemicals because governments were not bold enough to demand that the industry label them.”

Toxic recycling continues
Delegates agreed to allow recycling materials containing toxic flame retardants (PentaBDE and OctaBDE) found in furniture and electronic waste (e-waste). If the chemicals are not removed, they are carried into new products when the plastic is recycled. The practice violates the Stockholm Convention, which explicitly prohibits recycling and reuse of substances on its list. Ironically, the decision admitted that toxic flame retardants had been detected in a range of articles in use, including plastic toys.  A new IPEN study2 shows that continuing the toxic recycling policy widely contaminates children’s products.

“The toxic recycling of POPs-containing materials into toys and other products is a very bad news for children’s and workers’ health, and is therefore a total let down,” added Thony Dizon, Coordinator of the EcoWaste Coalition’s Project Protect.

Expert committee warns against toxic recycling
The treaty’s expert committee has warned against the toxic recycling practice and explicitly recommended to eliminate these substances from the recycling stream “as swiftly as possible,” noting that, “Failure to do so will inevitably result in wider human and environmental contamination… and in the loss of the long-term credibility of recycling.” The proposed recycling exemption also is tantamount to legalizing electronic waste (e-waste) dumping in developing countries, which is cynically described as “recycling.”

“E-waste is the fastest growing waste stream in the world and it appears that governments want to dump even more,” said Dr. Tadesse Amera, PAN Ethiopia. “We already receive massive quantities of e-waste and now it seems they want to increase our toxic burden – exactly opposite to the treaty’s goal.”

Hexachlorobutadiene listed
Delegates agreed to add hexachlorobutadiene (HCBD) to Annex C – the part of the treaty that deals with unintentionally-produced substances. The listing paves the way to address HCBD releases through recommendations on Best Available Techniques and Best Environmental Practices.

IPEN is a network of public interest non-governmental organizations working in more than 100 countries to reduce and eliminate the harm to human health and the environment from toxic chemicals. www.ipen.org  twitter: @ToxicsFree