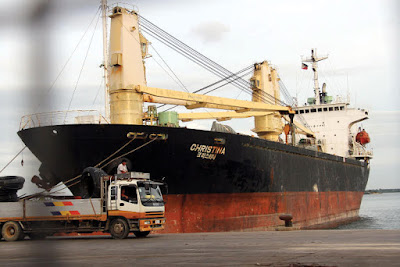 The EcoWaste Coalition, a waste and pollution watch group based in Quezon City, has thrown its weight behind a move to quickly ship back illegal trash shipments from South Korea that entered the country through the Port of Cebu.

Through a statement, the group conveyed its support to the position made by Bureau of Customs Cebu District Collector Elvira Cruz and Environmental Management Bureau Regional Director William Cunado for the immediate shipment of the unlawful trash imports to its origin.

The trash shipments amounting to 5,000 metric tons of mixed wastes, misdeclared as “solid granular particles of wood chips and synthetic resin”, arrived in the Port of Cebu last January 20 on board M/V Christina and were consigned to Moving Forward Global Trading Inc.

“We laud and back the customs and environmental authorities in Cebu for acting fast to ensure the return of the unsorted wastes from to its sender without delay,” said Aileen Lucero, National Coordinator, EcoWaste Coalition.

“We are one with them and with the people of in asserting that our nation is not an open dumpsite for the world’s garbage,” she declared.

“The swift and unequivocal action by the authorities will send a clear signal to all people behind the illegal waste trade that dumping is not allowed in the country,” she added.

“The perpetrators should be charged in court and punish to the fullest extent of the law to deter similar incidents in the future,” she said.

“This dumping incident is reminiscent of the still unresolved shipment of mixed household rubbish from ,” she stated.

Some 103 container vans of mixed household garbage from  disguised as scrap plastics for recycling arrived in ports some time in 2013-2014 and providently intercepted by the customs authorities.

Also, the EcoWaste Coalition commended the concerned citizens of Barangay Tingub in for reporting the reeking garbage to the authorities.

“We thank and salute the residents of Barangay Tingub for their vigilance, which helped in bringing the unlawful dumping to light,” Lucero said.

“Aside from removing the garbage left at a warehouse in Barangay Guizo and at a vacant lot in Barangay Tingub, the importer should ensure that the affected areas are safely disinfected to prevent any health risk to the public,” she said.