Communities Express Alarm on the Revival of Incinerators

Residents from communities affected by “state-of-the-art” incinerator plants expressed alarm over Senate Bill 225 proposed by Senator Antonio Trillanes’ which aims to amend the Clean Air Act of 1999 to allow use of burn technologies as a quick-fix solution to the country’s garbage woes. 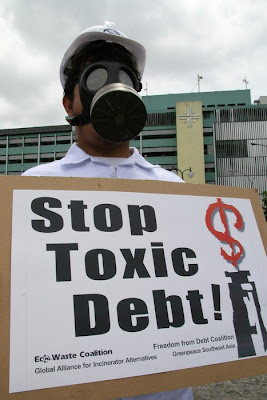 "We are alarmed by the ongoing push by some public officials including Senator Trillanes to revive the use of incinerators as a “solution” to our garbage problem. Up to now, we are suffering from toxins emitted by an incinerator plant adjacent to our community. Many of our children suffer from severe cases of respiratory ailments and we’ve observed abnormalities in reproductive growth experienced by some residents. We are very concerned about the effects of these toxins to the health of our children,” said Beng Hilario, a resident of Barangay Aguado in Trece Martirez, Cavite.

Barangay Aguado is host to an incinerator plant owned by Integrated Waste Management Incorporated (IWMI). The plant started operating in 2003 but was shut down in 2005 due to the strong opposition of nearby communities and its failure to comply to existing standards. The Department of Environment and Natural Resources (DENR) however reissued a permit to IWMI to resume its operation in 2009 and the facility is currently treating agrochemical and industrial waste.

In an independent test commissioned by the International POPs Elimination Network (IPEN) in 2005, eggs of free-range chicken collected near IWMI were found to have high levels of dioxin exceeding three times the limit set by the European Union (EU). Dioxins are categorized as persistent organic pollutants (POPs) which are extremely toxic to human health and wildlife.

“We oppose the proposal to revive the use of incinerators to manage our municipal and medical waste. Its revival would be heartbreaking personally for my family who sacrificed and fought hard for the permanent closure of a hospital incinerator situated across our home. We have endured for years the smoke and toxins emitted by the ‘high tech’ incinerator. The awareness of the consequences it would bring to our health and well being, to our families and our young ones is more than enough to oppose its revival. For us who experienced the effect of incineration, I could say that the trauma will linger for the rest of our lives,” Mrs. Diana Magbanua of Brgy. Q. Abeto, Mandurriao, Iloilo City.

The Western Visayas Medical Center (WVMC) is one of the recipients of 26 “high-tech” incinerators that were loaned by the Philippine government through the Bank of Austria. The said incinerators failed the DENR’s initial tests on air quality standards and were totally decommissioned in June 2003 with the effectivity of the incineration ban under the Clean Air Act. However, the Philippine government still pays almost half a billion Philippine Pesos or Php 92 million every year from 2002 until 2015 for these obsolete incinerators.

The Clean Air Act of 1999 or Republic Act 8749 banned the use of incinerators to dispose of municipal and medical waste. However, numerous communities are now facing threats of becoming hosts once again to proposed “waste-to-energy” facilities such as gasification, thermal oxidizers, pyrolysis and plasma arc, which are all incinerators-in-disguise.