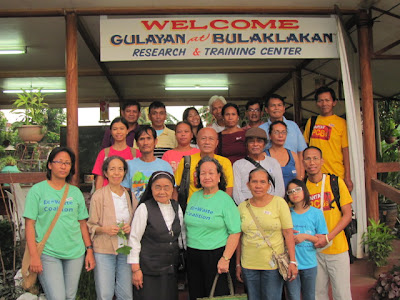 “The transition has to take effect fast as we badly need to restore the health and fertility of our farms that are being tormented by the indiscriminate use of synthetic fertilizer and pesticide inputs,” Bernie Aragoza, chair of the EcoWaste Coalition’s Task Force on Ecological Agriculture.

The group aired this plea at its recent seminar on ecological farming in Quezon City that brought together urban and rural leaders from different community groups in Bataan, Cavite, Laguna, Nueva Ecija, Rizal and Metro Manila.

Participants of the seminar learned about the simple, low-cost and effective ways of doing homemade garden concoctions as substitutes to chemical fertilizers and pesticides, the employment of beneficial microorganisms and the cultivation of food crops in clay pots or recycled containers for space-challenged homes, barangays, schools and churches.

According to Aragoza, transitioning from use of agro-chemical inputs to natural and ecological farming will bring about other benefits, including ensuring safe produce, protecting water resources from chemical runoffs, and saving money from costly chemical inputs.

“In lieu of synthetic chemicals, we can make concoctions out of alternative raw and natural materials that can serve many purposes such as for nitrogen fixing, controlling pests, enriching the soil, and inducing the growth and flowering of plants and trees. These alternative materials are many, cost almost nothing and mostly available in backyards and in kitchen waste like left-over cooked rice, ripe papaya, garlic or ginger, and fish bones, intestines or gills,” Aragoza suggested.

“By making use of these alternative materials, we also reduce our household biodegradable waste and prevent the formation of greenhouse gases by diverting organics away from dumpsites,” he said.

Last year, Congress passed RA 10068, the Organic Agriculture Act of 2010, to promote the practice of organic agriculture to increase farm productivity, aid in reducing pollution and destruction of the environment, and further protect the health of farmers, consumers and the general public, which the EcoWaste Coalition said should be widely supported.
Email Post