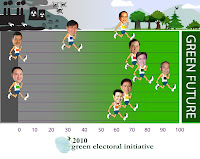 QUEZON CITY. To commemorate Earth Day, environmental groups Greenpeace and the Ecowaste Coalition today released the final results of the 2010 Green Electoral Initiative (GEI) with independent candidate Nicky Perlas, Sen. Jamby Madrigal and Sen. Richard Gordon emerging as the “greenest” amongst those aspiring for the presidency.
Perlas garnered the most points based on the overall assessment made by an independent and non-partisan panel of evaluators. Trailing him are Senators Madrigal and Gordon, who had almost equal ranking. Bangon Pilipinas candidate Eddie Villanueva, Sen. Noynoy Aquino, Sen. Manny Villar, and Ang Kapatiran candidate JC Delos Reyes rounded up the green to gray ranking system applied by the GEI evaluators. Former President Joseph Estrada and administration candidate Gibo Teodoro ended at the bottom of the list for their failure to respond to the survey.

“Given the escalating environmental threats now before us, it is important for the public to know where the presidential candidates stand on these issues and how they intend to address these ecological challenges if elected. More than ever, the country needs enlightened leadership to reverse ecological ruin and prepare our people against the impending hardships associated with climate change and interrelated disasters,” said Von Hernandez, Executive Director of Greenpeace Southeast Asia.

Focused primarily on the presidential contenders, the 2010 GEI consisted of a pre-election questionnaire challenging them to present and outline their positions on key environmental issues. These include climate change and energy, water, solid waste, chemical safety, sustainable agriculture and genetically modified crops, forests, mining, nuclear power, urban environmental challenges like smoke belching and the proliferation of huge billboards, and the candidates’ environmental agenda during their first 100 days in office.

The evaluators assessed each of the candidates’ responses based on agreed criteria with specific points assigned per question and issue area. Candidates were also asked to affix their signatures on their completed questionnaires. The results and complete responses of candidates will be available to the public at www.greenpeace.org.ph/elections.

“We will make sure to hold whoever wins in the 2010 presidential race accountable for the positions they have outlined in this survey, through the various campaigns and efforts by our member and partner groups. This is part of our continuing mission to ensure good governance in the country. Our leaders have an obligation to honor the public’s desire for a clean and safe environment. This initiative is consistent with that mission, “ said Eileen Sison, NGO representative to the National Solid Waste Management Commission, and a member of the GEI panel of evaluators.

Some of the Highlights of the 2010 GEI include the following:

1. All respondents favor the phase-out of coal power and support the increasing share of renewable energy (eg geothermal, wind, solar, etc) in the country’s energy mix;

2. All respondents support the full-scale implementation of the Ecological Solid Waste Management Act or RA 9003, as well as a ban on single-use plastic bags;

3. All respondents support the elimination of lead and other chemicals of concern in paint and other consumer products;

5. All respondents are against the importation of genetically engineered food crops into the country;

6. All respondents support the position of the Department of Health to stop the aerial spraying of agro-chemicals in banana plantations;

7. All respondents are for the establishment of national targets to progressively reduce the amount of chemical pesticides and fertilizers in agriculture;

8. All respondents are in favor of amending the Clean Water Act to incorporate a framework of Zero Discharge of hazardous chemicals from factories and domestic sources;

9. All candidates support the imposition of a Total Commercial Log Ban in the remaining forest areas in the country;

10. With the exception of Sen. Villar, all the respondents are against the proposed re-commissioning of the Bataan Nuclear Power Plant (BNPP). Perlas, Madrigal, Villanueva, Delos Reyes were clearly opposed to nuclear power as an option, while Villar, Gordon and Aquino flagged the need for more studies based on experience in other countries and opinion of experts.

11. All respondents expressed support for an Alternative Mining Code which seeks to revise the current framework of the mining industry in the country.

12. Most candidates opposed the proliferation of huge billboards (Perlas, Delos Reyes, Madrigal, Gordon, Aquino), and all expressed the need to regulate them;

13. All respondents support tackling smoke belching as a priority with Perlas committing to solve the problem as part of his first 100 days, and Gordon vowing to go out in the streets with emission tester at hand to stop violations himself.

14. Sen, Madrigal intends to serve as concurrent Secretary of the DENR if elected and order an immediate review of all Mining permits issued by the government, and suspend further issuances in her first 100 days. Bro. Eddie Villanueva vows to impose a moratorium on all large-scale, open pit mining. Sen. Villar says his first environmental act would be the promotion of green collar jobs, while Sen. Gordon will prioritize the inclusion of sustainable development and climate change adaptation in the Medium Term Development Plan and vows to carry out the plan.

Additional Information for the Media:

B. The criteria applied by the panel to assess candidates’ responses include: a) clarity of position FOR the environment, b) quality and comprehensiveness of response, and c) consistency of position.

D. Former President Joseph Estrada and administration candidate Gibo Teodoro failed to submit their responses despite an extension of the deadline and regular attempts by organizers to follow up with their staff and campaign representatives. The non-participation of Estrada and Teodoro was seen by GEI Evaluators as an indication that the environment is not a priority in the agenda and platform of both candidates. As a result, both candidates received zero points and landed at the bottom of the rankings.