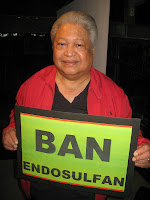 Quezon City. The environmental and health group BANtay Endosulfan today renewed its call for the immediate return of the highly toxic pesticide to Israel for environmentally sound disposal.
Bantay Endosulfan, a non-governmental group monitoring the retrieval and disposal of endosulfan from the MV Princess of the Stars, pressed for the “return to sender” option as packs of the toxic chemicals are retrieved from the sunken vessel.

“In the interest of public health and safety, we urge Del Monte Philippines, Inc. (DMPI) to prepare and proceed with its plan of shipping back the dangerous chemicals to its Israeli manufacturer,” Manny Calonzo of the EcoWaste Coalition, a partner group of BANtay Endosulfan, said.

“The ongoing legal case involving DMPI and Sulpicio Lines should not in any way impede the immediate removal of endosulfan from the Philippine soil. Photo and video documentation and other pertinent certifications and records should be admissible in court,” Calonzo added.

Rep. Edcel Lagman, a lawyer himself, expressed support for the BANtay Endosulfan’s proposition saying that “you need not preserve the body of a murder victim in the morgue to prove the crime.”

In her letter to the EcoWaste Coalition, Undersecretary Maria Elena Bautista of the Department of Transportation and Communications, confirmed that DMPI intends to return the organochlorine pesticide to its manufacturer, the Makteshim Agan of Israel.

“Upon retrieval of the endosulfan, Del Monte as consignee and supposed owner of the cargo intends to ship back said chemical to its manufacturer in Israel,” Bautista wrote in reply to BANtay Endosulfan’s query on how the salvaged pesticide will be disposed.

Bautista also informed BANtay Endosulfan that in light of the ongoing court case between DMPI and Sulpicio Lines the recovered endosulfan will be put in custody of the court as evidence while the case is being litigated.

According to the DOTC official who also heads the Task Force MV Princess of the Stars, the court will assign a warehouse for the temporary storage of the endosulfan as approved by the Department of Environment and Natural Resources – Environmental Management Bureau.

“There is simply no justification for endosulfan to remain in the Philippines and pose grave threats to the health and safety of handlers and transporters and to the very community where it will be stored,” BANtay Endosulfan stressed.

BANtay Endosulfan was initiated by environmental and health groups to thwart the possible disposal of the retrieved cargo through incineration or landfilling, and also to press for a total ban on the importation, sale and use of the highly toxic pesticide.

CIWI said…
I have blogged about it:

Do you have the name of the Israeli manufacturer?
- Karin
Wednesday, October 08, 2008