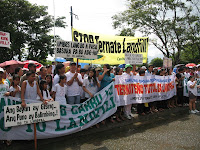 TERNATE, Cavite - More than 4,000 residents, students, teachers, parents, non-government organizations and lay persons from Ternate, Cavite and nearby municipalities marched in the town streets to denounce the construction of the proposed provincial landfill for Cavite within their watershed area.

“We are in the streets to express our disappointment and outrage for the failure of our local leaders to uphold the will of the people. How can they approve the construction of this toxic facility even though they are fully aware that Ternateňos vehemently oppose this landfill project?” said Analiza Vallesfin of the multi-sectoral group Ternate Against Landfill Association (TALA).

The protestors condemned the resolution issued by the six members of the Sangguniang Bayan (SB) of Ternate last September 4, 2008 that allows the construction of the landfill in Ternate. The remaining SB members and the Vice Mayor Ternate opposed the said project and they didn’t vote. Mayor Conrado Lindo, the number one opponent of the said landfill project three months ago, hastily approved the said ordinance last September 8.

But as attested by SB Member Jayson Cabaña, one of the local leaders who opposed the proposed landfill project, “There is no showing or proof that there was first a roll call made of the members present and then a determination of the requisite quorum by the Secretary upon inquiry by the Temporary Presiding Officer, prior to the holding of and proceeding with the so-called regular session on September 04, 2008, when and where the subject Resolution was supposedly passed.”

The huge crowd marched on the streets of Ternate and visited the houses of the six SB members and Mayor Lindo. They held a small program and prayed for the said local leaders. The protestors then proceeded to the municipal hall of Ternate and Sto. Nino Parish Church for the main program.

The proposed “sanitary” landfill measuring 8-hectares will be built in Barangay Sapang I, a site identified by the Local Water Utilities Authority (LUWA) as part of the ground water basin area of the town. The landfill is also within the buffer zone of Mt. Palay palay/ Mataas na Gulod Natural Park, home to some of the country's endemic and endangered species of fauna and flora such as the rufous hornbill, Luzon bleeding heart and Philippine woodland frog.

The proposed landfill will cater to mixed wastes from the different municipalities and cities of the province. It is being spearheaded by Cavite Governor Ayong Maliksi and EnvironSave, the private company who will build and operate the said facility.

“This facility will contaminate our groundwater and pollute our environment. We do not want our children to live in this kind of environment. We will oppose this waste disposal facility until the very end,” said Vallesfin.

“Our leaders should not resort to quick but expensive and destructive solutions to garbage woes. Landfills are failed technologies and breed the same corruption that fuels the expensive collect and dump waste management system,” said Ochie Tolentino, coordinator of the Cavite Green Coalition and a member of Task Force Dumps of the EcoWaste Coalition.

Tolentino exampled the recent toxic leachate dumping incident in Montalban Sanitary Landfill that leads to further contamination of the Montalban River. The said facility has an environmental clearance certificate from the Department of Environment and Natural Resources (DENR) and it is considered as a “model” sanitary landfill.

“There have been advances towards zero waste as shown by various cities and municipalities around the country. All it takes is the political will and eagerness of our leaders to capacitate their barangays and stakeholders to implement ecological solid waste management,” said Tolentino.