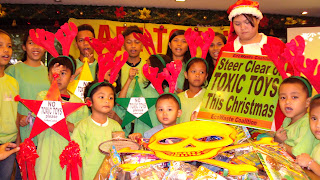 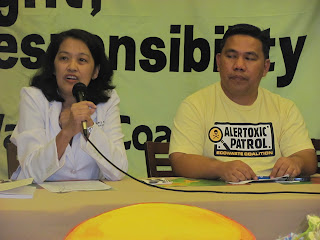 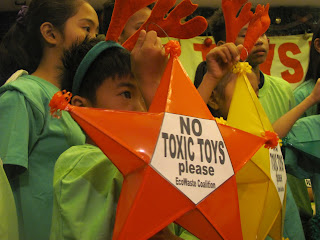 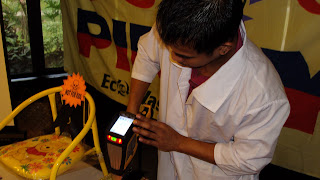 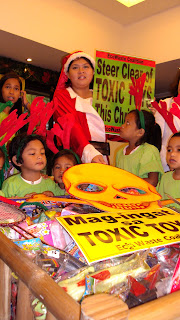 With only 12 days before Christmas, the EcoWaste Coalition stepped up its call for consumers to take all precautions against chemicals exposure as they rush to pick and buy toy gifts that abound in the market today.

Through a sampling of assorted toys purchased from various retailers across the country during the “ber” months, the EcoWaste Coalition generated thought-provoking data showing that 313 out of the 518 samples (60%) had health-damaging heavy metals such as lead, a potent brain poison, above levels of concern.

The samples, with prices ranging from P2 to P210, were procured from September to December from toy vendors in major commercial hubs such as Baclaran, Divisoria and Monumento in Metro Manila, in market and mall stores in Cabanatuan and Gapan, in Carbon and Colon in Cebu City and in Bangkerohan, Davao City.

The release of the sampling data came on the heels of fresh legislative measures in both houses of the 15th Congress, as well as in Manila and Quezon Cities, to regulate harmful substances such as toxic metals and plasticizers in toys.

In Manila, the City Council on December 4 approved a resolution authored by Councilor Numero Lim and other lawmakers asking the toy industry “to prioritize children’s health and safety over and above profits,” while a similar resolution was proposed on December 10 by Councilor Dorothy Delarmente calling for random inspection of toys being offered for sale in Quezon City.

“May this new set of data induce parents and children alike to be extra careful and inquisitive when shopping for toys as a precaution against items secretly loaded with toxic substances that could put kids’ health in danger,”stated Thony Dizon, Coordinator of the EcoWaste Coalition’s Project Protect.
“We also hope that, with such vital information, P-Noy and our policy makers will be convinced to swiftly enact a legislation that will impose outright ban against lead and other chemicals of concern, including carcinogenic and endocrine disrupting chemicals, in toys our children play with,” he pointed out.

Speaking at the press conference, toxicologist Dr. Rhodora Reyes said that“young children are prone to lead exposure that could damage their developing brains and bodies,” adding that “health experts have identified no safe level for childhood lead exposure.”

“It is therefore important to eradicate sources of human exposure to lead and to improve monitoring and surveillance efforts,” concluded Reyes who is the President of the Philippine Society of Clinical and Occupational Toxicology.

The outrageous amounts of lead found in the toy samples should prompt the Department of Environment and Natural Resources into issuing the long-delayed Chemical Control Order for Lead and Lead Compounds that would have prohibited the use of lead in the manufacturing of toys, the EcoWaste Coalition said.

As presented during a press conference in Quezon City, the EcoWaste Coalition reported that:

1. A total of 313 products (60%) contained at least one toxic metal above levels of concern such as antimony, arsenic, cadmium, chromium, lead and mercury, which were the focus of the study.

2. 40% of the products did not contain toxic metals (or contained low levels of them) indicating the technical feasibility of manufacturing products that do not expose children to toxic metals.

3. The absence or low detection of toxic metals does not prove the safety of the products since the study did not identify or measure other substances of concern such as bisphenol A and phthalates. 4. 189 children’s products (36 %) of the samples had lead levels above the US regulatory limit of 90 parts per million for lead in paint.

5. 19 children’s products contained mercury and 7 of them were children’s cosmetic products that exceeded the 1 ppm“allowable limit” as set by the Food and Drug Administration.

6. 105 products (20%) contained more than one toxic metal which increases the potential harm due to multiple exposures.
7. None of the products containing toxic metals were labeled with information about their chemical or material content to warn consumers.

During the press conference, the EcoWaste Coalition tagged 10 toys with “Not For Kids” seal for containing some of the highest concentrations of lead and other toxic substances among the samples. These were:


10. A “Pretty Girls” makeup set with flower case from Divisoria, with 326 ppm of mercury.
In 2011, the EcoWaste Coalition, together with IPEN and local NGO collaborators, analyzed 435 toys and related children’s products and detected heavy metals in 124 of the 435 samples tested (29%) .

“The number of toys with considerable quantities of toxic metals this year is much higher than what we found in 2011, a grim proof of the need for the toy industry to ‘detox’ their products ” Dizon lamented.
-end-
Posted by EcoWaste Coalition at Thursday, December 13, 2012