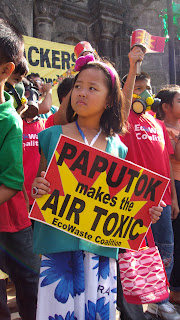 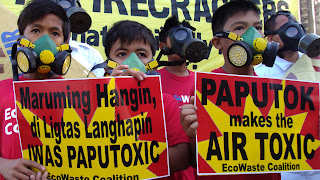 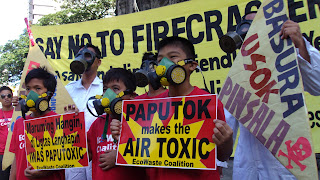 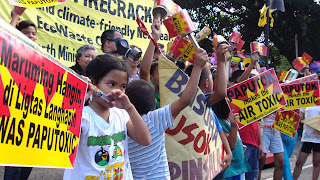 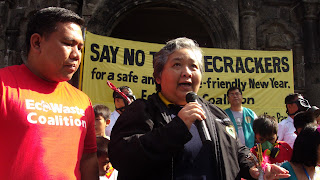 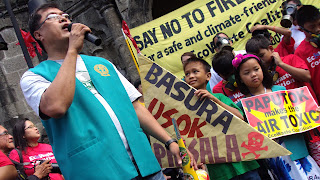 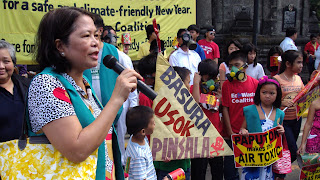 As the countdown to the New Year approaches, various groups on Sunday drew attention to the health-damaging pollutants discharged from the blasting of firecrackers and fireworks.
In a bid to persuade the public to shift to an emission-free welcome of the New Year, the EcoWaste Coalition and the Our Lady of Remedies Parish Care for the Earth Ministry and Children’s Ministry held an“Iwas PapuToxic” campaign in front of the Malate Catholic Church that also saw doctors from the Philippine College of Chest Physicians and Philippine Medical Association attending.

As if in the midst of a chemical disaster, some of the children and youth participants wore authentic gas masks to illustrate how “very unhealthy” the air can turn with the warlike detonation of firecrackers and fireworks, especially during the New Year’s eve.

"The pervasive pollution is lamentable knowing that country's quest for clean air is yet to be won. A New Year's celebration promoting a clean and safe environment, the sanctity of life and a culture of peace is the call of the hour," said Father John Leydon, Parish Priest, Our Lady of Remedies Parish.

“The marked increase of particulate matter in the atmosphere can cause nose, throat, chest and eye problems and aggravate the conditions of people suffering from allergies, coughs and colds,” said Dr. Maricar Limpin, former President, Philippine College of Chest Physicians.

Exposure to firecrackers and fireworks can further cause a host of respiratory problems such as bronchial asthma, allergic or chronic bronchitis, laryngitis, pneumonia and rhinitis, Dr. Limpin, a pulmonologist said.

The groups expressed serious concern over a possible recurrence of the “very unhealthy” air quality as experienced by Metro Manila residents on January 1, 2012 in the aftermath of the last New Year’s revelry.

As for the total suspended particulate (TSP), eight of the nine monitoring stations went above the 24-hour guideline value of 230 ug/m3 on January 1, 2012. The average TSP recorded was 477.67 ug/m3.

According to the DENR-EMB, the prevailing weather condition during and after the 2012 New Year’s celebration, particularly the low ambient temperature, low wind velocity and low laying clouds, triggered the air pollution episode and even contributed to low visibility.


Since the PM10 and TSP levels have reached the “very unhealthy” levels as per the air quality index (AQI), the DENR-EMB should have, in accordance with the Clean Air Act, issued cautionary health statements that say: “Pedestrian should avoid heavy traffic areas. People with heart or respiratory disease such as asthma should stay indoors and rest as much as possible. Unnecessary trips should be postponed. People should voluntarily restrict the use of vehicles,” the groups noted.

Given the importance of informing the public about the state of air pollution and its impact to health, the groups urged the government to monitor the air quality on December 31 and January 1, disseminate the generated data and issue appropriate advisories based on the AQI cautionary statements.