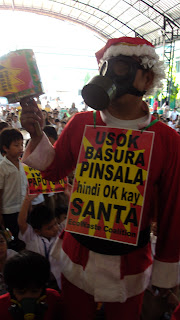 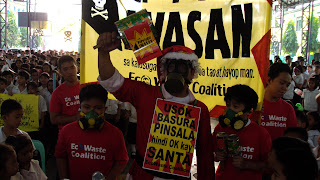 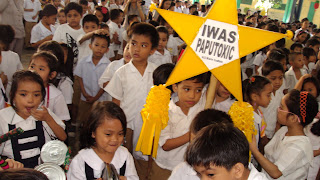 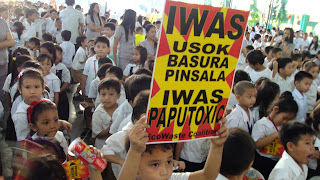 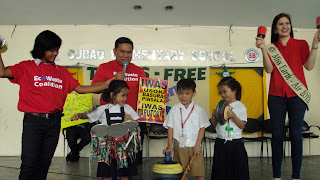 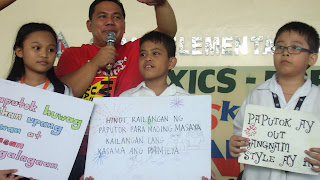 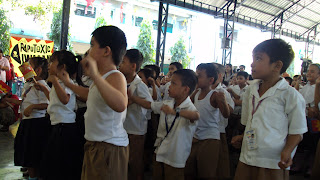 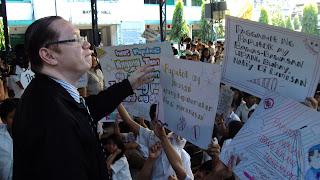 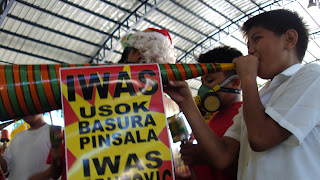 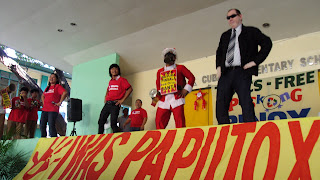 Environmental and health advocates from the EcoWaste Coalition, together with hundreds of students of Cubao Elementary School (CES) in Quezon City, kicked off their annual drive against the use of firecrackers by holding an on-campus noise barrage simulating the New Year reception sans health-damaging and environment-polluting firecrackers.

Instead of using harmful firecrackers, the school assembly, led by Principal Elena Bote, simultaneously produced sounds out of eco-friendly, home-made noisemakers such as the well-known torotot to simulate the countdown celebration to a New Year.

The event formally launched the EcoWaste Coalition’s yearly “Iwas PapuToxic,” which complements the Department of Health’s “Iwas Paputok” campaign. Now in its seventh year, “Iwas PapuToxic” seeks to dissuade the public, especially the youth, from using firecrackers throughout the holiday season to prevent injuries and deaths, as well as toxic environmental pollution.

“Given the fragile state of our climate and environment, we urge everyone to welcome the New Year without the shedding of blood and the massive pollution from the blasting of firecrackers and fireworks,” said Aileen Lucero, Iwas PapuToxic Campaigner of the EcoWaste Coalition.

“The conventional use of firecrackers and fireworks to usher the New Year has long been identified as a major source of accidental injuries and deaths, as well as noise, garbage and air pollution,” she added.

To hammer home this message, Santa Claus and two students from CES donned gas masks to demonstrate the toxic effects of paputok explosion to the air we breathe.

Also present at the launch were representatives from the Philippine National Police and several environmental groups.

In light of the tragedy super typhoon Pablo has brought to Mindanao two weeks ago, where more than 1,000 people were already confirmed dead, the EcoWaste Coalition called on the people to drop their plans to light firecrackers or conduct fireworks displays.

“We appeal to the hearts of those Filipinos preparing for their annual pyrotechnic shows to cancel your plans and instead contribute the money you’ll save to help the typhoon victims,” suggested Betty Cabazares, member of the Steering Committee of the EcoWaste Coalition based in Davao City.

“Aside from minimizing toxic chemicals emission and firework-related accidents and injuries, such compassionate and considerate gestures will surely benefit affected families and raise their hopes for a brighter New Year,” Cabazares added.

For a toxics-free New Year celebration, the EcoWaste Coalition recommends the following eco-friendly noisemakers as alternatives to firecrackers and fireworks. These are:

1. Blow Pinoy-style trumpets (torotot).
2. Clank improvised cymbals such as pot lids or pans.
3. Jangle some maracas from used tin cans.
4. Rattle the tambourine made from flattened bottle crowns.
5. Jiggle "piggy banks" or "shakers" from paper box or plastic bottles with seeds, pebbles or coins.
6. Play home-made drum made of big water bottles, biscuit cans or buckets.
7. Create whistling sound or get a whistle and blow it.
8. Strike the batya or palanggana (washbasin) with a ladle or stick.
9. Bang empty coconut shells.
10. Play your favorite music or musical instruments or just turn on the radio.
11. Set the alarm clock at 12:00 midnight or play ringtones altogether.
12. Beep the bicycle or car horns.
13. Clap your hands and stump your feet.
14. Laugh at the top of your lungs.
15. Do the latest dance craze “Oppa Gangnam Style,” twist and shout “Happy New Year!”