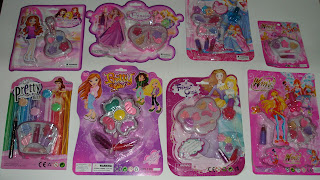 Toy cosmetics containing highly toxic mercury should not be given as Christmas gifts to children, a toxics watchdog warned today.

The EcoWaste Coalition urged consumers to refrain from buying such toy cosmetics, and not to give related items already purchased to children unless there is a verifiable assurance of safety.

The group made the last-minute plea after buying and testing 10 samples on December 22 of toy cosmetics that retailers in Divisoria sell for only P10 to P50.

“Our investigation shows that some play make-up sets are not safe to play with due to the presence of mercury that can damage the kidneys, reduce skin's resistance to bacterial and fungal infections, as well as cause skin discoloration, rashes and scarring,” said Aileen Lucero of the EcoWaste Coalition’s Project Protect.

“Girls, in particular, are unknowingly exposing themselves to mercury and other toxic metals when they play actress, princess or Miss Universe and apply unsafe cosmetics to their faces and lips,” she added.

“Mercury, lead and other health-damaging chemicals should not be present in cosmetics and other consumer products, especially those intended for kids,” she emphasized.

Traces of mercury were detected in 8 of the 10 samples in the range of 3.7 to 554 parts per million (ppm), exceeding the government's "allowable limit" of 1 ppm for cosmetics.

For example, a "Pretty Girl" make-up set, while providing a detailed list of its supposed ingredients did not mention the excessive levels of mercury detected in the lipstick and blush-on powder at 554 ppm and 198 ppm, respectively.

"Fashion Girls" make-up set, on the other hand, was found to contain 179 ppm of mercury while claiming on its label that it is "designed to be safe and harmless."

Based on the X-Ray Fluorescence (XRF) screening results, the EcoWaste Coalition cautioned the public against buying and giving the following items as Christmas presents:

None of the 8 mercury-tainted play cosmetics provided information about their manufacturers or distributors.

The EcoWaste Coalition had earlier reported finding health-damaging heavy metals in 313 out of 518 toy samples that the group procured from retailers in Luzon, Visayas and Mindanao during the “ber” months (September to December 2012), underpinning their call for robust toy safety legislation.