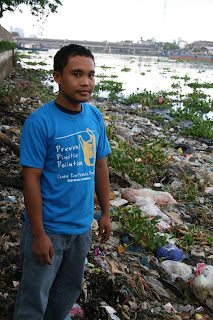 20 March, 2007, Quezon City – As the world commemorates the World Water Day on March 22, the EcoWaste Coalition and Sagip Pasig Movement appeal to the public not to throw their discards in rivers, esteros and canals and instead join hands in strengthening the implementation of ecological solid waste management in their barangay.

“Our waterways are vital ecosystems that have sustained countless generations of Filipinos by providing clean water, food and access for trade and commerce. That is why it is really saddening to see how we reduce our water bodies into dumping grounds for our domestic and industrial waste,” said Meth Jimenez of Sagip Pasig Movement.

Major rivers and tributaries across Metro Manila like the Pasig River, Marikina River and Tullahan River have been clogged by mixed waste which causes flooding and infestation of rodents, flies and mosquitoes on the many parts of the metropolis. Trash thrown in waterways end up in the sea, and is a threat to the country's already fragile marine ecosystem.

According to the latest monitoring of the 15 large pumping stations in the metropolis by Metro Manila Development Authority (MMDA), there was a drastic increase in the volume of garbage collected from a total of 13, 988 cubic meters in 2005 to 18,796 cubic meters last year.

In the discard survey facilitated by EcoWaste Coaliton and Greenpeace in Manila Bay in 2006, 60% of the garbage collected were plastics and mostly single-use disposable plastic bags.

“One of the most important steps in protecting our waterways is to push for the strengthening of ecological solid waste management in every barangay and industry,” said Gigie Cruz of Plastics Task Force of the EcoWaste Coalition.

The Coalition believes that the country's existing environmental laws such as Ecological Solid Waste Management Act and Clean Water Act provide sufficient framework in protecting our rivers and other bodies of water.

“The local government and the different sectors should unite in providing awareness and guiding the communities in managing ecologically their discards, and ensuring industry compliance to necessary pollution prevention and mitigation requirements,” said Cruz.

“Everyone can do their share in cleaning up our waterways. Avoid using plastics and disposable materials and shift to using reusable bags or containers. Segregate our discards at home, recycle, compost. Improve the collection and maintenance of Metro Manila’s sewerage systems. Let us act now to restore the health and integrity of our rivers,” said Jimenez. 5 March 2007, Quezon City. Green groups today urged Filipinos to "vote for a green future" this May during the launch of the 2007 Green Electoral Initiative in Quezon City.

Spearheaded by the EcoWaste Coalition and Greenpeace, the Green Electoral Initiative aims to assess the "greenness" of aspiring senators based on their positions on key environmental issues and produce a guide that will help Filipino voters make more informed choices in the coming elections.
The elections are a mere two and a half months away, but the country has yet to see how the environment figures in the agenda of candidates aspiring for national office. For the most part, political realignments, mudslinging, fluff, and scandals still predominate the discourse of the current electoral contest, while environmental issues are given only slight, and sometimes not even token treatment. For a nation that is regularly confronted with serious environmental threats, and increasingly frequent environment-related calamities, it is unthinkable that this issue has not even merited prominence in the current debates," said Greenpeace Southeast Asia Campaigns Director Von Hernandez.

"With the Green Electoral Initiative, we are challenging senatorial aspirants to disclose how the welfare of the environment figures, or doesn't figure, in their political plans."

As part of the initiative, Greenpeace and EcoWaste Coalition are sending out survey forms to all senatorial aspirants. The questionnaire, developed in collaboration with various environmental groups, focuses on key issues concerning water, solid waste, toxic waste trade and the Japan-Philippine Economic Partnership Agreement (JPEPA), genetically-modified organisms, sustainable agriculture, logging, mining, climate change, and air pollution. Candidates are also asked to disclose their track record in the environmental field and what measures for the planet they intend to initiate if elected to office.
"These are legitimate election issues that will have direct impact on community health and environment. As senatorial candidates woo us for our votes, it is their responsibility to tell the people their positions and planned actions on these issues," said EcoWaste Coalition Coordinator Rei Panaligan.
"We need to make our democracy work for a greener future. The environmental crisis is as much a political crisis. We cannot be ruled by ignorant, short-sighted, and greedy people and expect things to turn out better. We need leaders of great clarity and vision who will help reverse environmental ruin, move us quickly from fossil fuels to renewable energy, and help empower Filipinos to secure a safe and decent future. The choices the electorate will make in May will help decide whether the country is headed for a green or gray future," added Hernandez.
The Green Electoral Initiative 2007 is the second of its kind; the first of such projects was launched before the 2004 elections. The questions in the survey form this year were contributed by the Alyansa Tigil Mina, Basel Action Network Asia Pacific, Cavite Green Coalition, Concerned Citizens Against Pollution, EcoWaste Coalition, Global Alliance for Incinerator Alternatives, Greenpeace Southeast Asia, Health Care Without Harm, Miriam PEACE, Mother Earth Foundation, Philippine Greens, and the Philippine NGO Council for Security and Fair Trade.
For more information, please contact us at ecowastecoalition@yahoo.com or (02) 9290376.

Posted by Rei Panaligan at Monday, March 05, 2007 No comments: Links to this post

Letter to the Editor: PROTECT OUR WOMEN FROM TOXICS


The EcoWaste Coalition, an environmental network on waste and pollution issues, lauds the Filipino women, especially our mothers, for their paramount role in mentoring us on ecological practices such as repairing, reusing and recycling our discards.

In the process of turning households into homes, our mothers have instilled in us life-sustaining values such as caring for oursurroundings, doing more with fewer resources, cutting waste, and even creating wealth from trash.

Above all, we thank our mothers for nourishing us with breastmilk - the best and healthiest food for human babies that requires no packaging and causes no pollution.

As we celebrate the International Women’s Day, we would like to call attention to the need to protect our women from toxic chemicals that endanger their health and their capacity to bear, nurture and sustain life.

With thousands of chemicals being manufactured and traded globally, it has become "normal" to find toxics in cosmetic products, household cleaning materials, consumer goods, toys and, yes, in the air we breathe and in the food and water we consume.

Many of these chemicals are lipophilic, which means they lodge in the body's fat cells. As nature has endowed women's bodies with extra stores of fat for their childbearing and breastfeeding functions, women tend to be more vulnerable to contamination by these chemicals. So invasive are these chemicals that babies are born tainted with assorted toxics.

In 2005, the Environmental Working Group and Commonweal released a report showing an average of 200 industrial chemicals and contaminants such as pesticides, consumer product ingredients, wastes from burning trash, gasoline and coal - in the umbilical cord blood of 10 babies born in US hospitals in 2004.

To honor our women and protect our children from harm, let us prevent and reduce toxic contamination of our environment from smoke-belching vehicles, dirty factories and products, horrendous dumps and incinerators and other pollution sources. Let us work together to eliminate human exposure to toxic hazards. This is the appeal of the EcoWaste Coalition as the country once again marks the Fire Prevention Month in March.

"We join the Bureau of Fire Protection in raising public awareness and action to prevent fires. Being an environmental group, we would like draw attention to the hazards of open burning and the availability of ecological alternatives to burning trash," said Merci Ferrer of the Coalition's Task Force on Open Burning and Incineration.

Despite being prohibited by Republic Act 9003 or the Ecological Solid Waste Management Act of 2000, open burning remains a serious public health and environmental threat in both urban and rural communities, observed the EcoWaste Coalition.

"We appeal to local governments officials, specially at the barangay level, to implement R.A. 9003, conduct information and education campaigns on the hazards of open burning and strictly monitor compliance," said Ferrer.

Open burning goes unchecked in dumpsites, farmlands, backyards and even in streets and parks. Unknown to many, the deliberate or spontaneous burning of discards is like a "silent killer," discharging minuscule pollutants that can trigger headaches, irritate the eyes, throat and skin, impair respiratory functions and even cause cancers.

The waste and pollution campaign network cited five key reasons why the public should not burn their discards.

1) OPEN BURNING IS UNLAWFUL. R.A. 9003 prohibits the open burning of waste and requires the ecological management of discards that will not harm the environment. Violators can be fined from P300 to P1,000, or imprisoned from 1 to 15 days, or both. Republic Act 8749 or the Clean Air Act of 1999 likewise bans and penalizes the incineration of municipal, biomedical and hazardous wastes.

2) OPEN BURNING IS TOXIC. Burning trash releases a cocktail of toxic chemicals some of which are targeted for global elimination under the Stockholm Convention on Persistent Organic Pollutants (POPs) such as dioxins and furans. Burning plastics can be very problematic, with PVC plastic specifically contributing to high emissions of dioxin, a proven
human carcinogen according to the International Agency for Research on Cancer (IARC). By-product smoke, filth and ash from open burning are known to contain particulate matters and other harmful substances.

3) OPEN BURNING POLLUTES THE FOOD SUPPLY. Dioxins and other chemicals released when trash is burned are deposited on leafy plants that are eaten by farm animals and ingested by fish. Studies show that dioxin accumulates in fatty tissue and is passed to humans through our consumption of dairy products, eggs, meat and fish.

4) OPEN BURNING WASTES RESOURCES. By setting discards ablaze, we squander valuable resources that could have been repaired, reused, recycled or composted. Fallen leaves and yard trimmings, for instance, could be turned into compost to nourish depleted soils.


The EcoWaste Coalition has come up with ten alternatives to the harmful practice of burning trash, emphasizing the need to consume responsibly, waste less and recycle even more.

1.) Reduce your waste and prevent noxious odors and keep flies, roaches and
rodents under control by not mixing discards.
2.) Reuse and recycle non-biodegradable discards such as papers, bottles and cans as many times as you can.
3.) Turn your biodegradable discards such as kitchen and garden trimmings into compost that can enhance soil fertility and health.
4.) Use second-hand, repaired and recycled products whenever available.
5.) Check for things that can be repaired or reused before deciding to
purchase new ones.
6.) Bring bayong or other reusable carry bags when you shop; refuse plastic bags.
7.) Reduce unnecessary packaging by buying in bulk or choosing items with the least packaging.
8.) Avoid throw-away items. Choose products that can be washed, stored and used again.
9.) Repair rather than throw or replace broken things.
10.) Give away unwanted stuff to neighbors or charities instead of putting them into the waste bins.

"For healthier neighborhoods, let us not litter, burn or dump our trash. Let us rekindle the bayanihan (communal spirit) to build Zero Waste communities," appealed the EcoWaste Coalition.

For more information, please contact the Ecowaste Coalition at (02) 9290376 or ecowastecoalition@yahoo.com.

Posted by Rei Panaligan at Thursday, March 01, 2007 4 comments: Links to this post