QUEZON CITY, Philippines - Two broad coalitions of citizens’ groups called today on both the national government and the Austrian government to annul a half a billion peso “toxic debt” that financed a failed Department of Health (DOH) project involving the importation of twenty-six medical waste incinerators for DOH-run hospitals in the country.

The Ecological Waste Coalition of the Philippines (EcoWaste) and the Freedom from Debt Coalition (FDC) said during the public launch of the “Stop Toxic Debt Campaign” that the loan, which was contracted in 1997 between Bank Austria and the Philippine Department of Finance (DOF), will have to be paid until 2014.
But the incinerators, which Greenpeace Southeast Asia claimed in an earlier report were substandard and did not meet the emission levels guaranteed by the supplier, had all been retired in 2003, when the incineration ban promulgated by the Philippine Clean Air Act of 1999 (CAA) took effect.
The loan financed the DOH’s project dubbed “The Austrian Project for the Establishment of Waste Disposal Facilities and Upgrading of the Medical Equipment Standard in DOH Hospitals.” It was originally intended to provide development assistance to Philippine hospitals in the area of medical waste management.
In 1997-1998, the incinerators with capacities of 300-500 kg of waste/day, a major component of the project, were set up in the various DOH-run hospitals throughout the country.
The payments on the loan’s principal have commenced in 2002 and the loan now represents a two-million dollar per year debt burden for the Philippines until 2014.

Toxic technology, Burning Money
According to Von Hernandez, Campaigns Director of Greenpeace Southeast Asia, the incinerators exported by Austria to the Philippines were of such low quality that they would never have been allowed to operate in Austria. The incinerators, however, were granted an exemption from the Environmental Impact Assessment process by the Department of Environment and Natural Resources (DENR).
A subsequent assessment of the incinerators’ emissions, jointly conducted by the DOH and the World Health Organization (WHO), revealed extremely high emissions.

According to Ronnel Lim, EcoWaste Coalition researcher: “Even if the incineration ban of the CAA never took effect, the incinerators’ emissions were outrageously high there was simply no way to defend them. In the joint DOH- WHO emission test conducted on one of the incinerators, the dioxin emission was a whopping 870 times the limit set by the CAA.”
FDC secretary-general Milo Tanchuling pointed out that the incinerator loan is a classic example of an illegitimate debt that was ““incurred to finance an ill-conceived development project that posed danger to our environment and the people.”
“Such debt is unacceptable and must not be honored. We call on the Austrian government to cancel and on the national government to repudiate the loan,” added Tanchuling.
Hernandez of Greenpeace Southeast Asia also called for the deal to be rescinded: "Filipinos will not tolerate being at the receiving end of toxic technologies. It is totally outrageous that we are paying for an obsolete and deadly technology. We are being cooked in our own juice."
Bishop Julio Labayen, joining the two coalitions, also vowed to bring the campaign to cancel the incinerator debt to Austria. He also appealed for the DOH and the Department of Finance to closely look into the loan agreement and seek ways to divert the loan payments to environmentally-friendly, non-burn medical waste treatment technologies instead.
Bishop Julio Labayen said that what makes the loan unconscionable is that the Philippine government is practically throwing money away at the same time that it is progressively cutting back on health outlays.
In the past 10 years, the DOH's budget as a percentage of the total national budget has decreased from about 2.53% in 1998 to just over 1% this year. Health expenditures have perennially lost out to debt service payments and national defense on the government's priority list.

QUEZON CITY, Philippines— Former Vice President Teofisto Guingona Jr criticized today the Japan-Philippines Economic Partnership Agreement (JPEPA), calling it one-sided and unfairly favoring Japanese interests.
"The unfair and one-sided provisions of the JPEPA encroach on the rights of the Filipinos to chart their own destiny," Guingona said at a press conference held at the Miriam College by the Magkaisa Junk JPEPA Coalition. Speaking during the same press conference, Dr. Leah Paquiz, president of the Philippine Nurses Association (PNA), also heavily criticized the JPEPA for granting Filipino nurses the status of second-class professionals in Japan.

According to her, Filipino nurses will be second-class professionals in Japan because under the terms being crafted by the Japan's Ministry of Health and the Japanese Nursing Association (JNA), they are mere trainees for up to three years until they pass the national licensure exam written in Japanese, an examination that is routinely failed by half of the Japanese citizens who take it.

Dr. Paquiz also pointed out the well-known hostility of the Japanese Nursing Association (JNA) against the entry of Filipino nurses in Japan. The JNA's official position is that the working conditions of Japanese nurses must first be improved before taking in Filipino nurses.

Dr. Paquiz said, "The insecurity of the status of our Filipina nurses under the JPEPA plus the hostility of the Japanese nurses to our presence there may conspire to gradually ease some of our nurses into sexual exploitation."

"In the guise of opening up the Japanese labor market, JPEPA may actually be setting up our nurses for failure, discrimination and possible sexual exploitation," Dr. Paquiz added.

Dr Paquiz was concerned that unscrupulous Japanese nightclubs may begin scouting for Filipina nurses to moonlight as sex workers under the JPEPA.

In 2005 Japan started to implement its Plan of Action to Combat Human Trafficking. Imposing stricter requirements for overseas performing artists (OPAs), including those who were before exploited and introduced to the Japanese sex industry, the implementation of the plan resulted in a drastic drop in the deployment of OPAS from a high of 74,480 by end of 2004 to a low of 42,586 in 2005 and only 10,615 by end of 2006.

"Our nurses have already sent huge amounts of remittances to prop up the Philippine economy," Dr Paquiz said, "yet the government still has to implement existing laws that uphold the dignity and provide just compensation for our local nurses."

Dr Paquiz was referring to RA 9173 or the Nursing Act of 2002, which provides that no public health worker shall receive compensation below salary grade 15. Also, according to Dr Paquiz, RA 7135 or the Magna Carta for Public Health Workers, which uplifts the working conditions of Filipino nurses, is yet to be fully implemented fifteen years after its enactment.

In the same press conference, Representative Risa Hontiveros of Akbayan said that a vital clue to the disadvantageous bargaining position of the Philippines in the negotiation of the JPEPA is that while Japan was able to exclude a total of 238 tariff lines, the Philippines only managed to exclude six.

"One major rationale for the Philippines entering into the JPEPA, upon which we have predicated our many trade concessions, "said Representative Hontiveros, "is the prospect of Japan opening up its labor force to our nurses. Now, even that one supposedly bright prospect is getting dimmer as the Japanese have begun erecting barriers to the entry of our nurses."

Lawyer Tanya Lat of the Initiatives for Dialogue and Empowerment through Alternative Legal Services, Inc. (IDEALS) said that the JPEPA offers, at best, very minimal gains for the Philippines.

"In exchange for the minimal, speculative and short-term gains," Atty. Lat said, "the government bargained the long-term development of our economy."

She added that the trumpeted inflows of investment under the JPEPA are speculative—given the unaddresssed issues that make the Philippines relatively an unattractive area for foreign direct investment—but the contraction of the Philippine agriculture sector, the displacement of farmers and the closure of local industries will be all real.

"Our Constitution provides that we should pursue a trade policy that serves the general welfare and operates on the basis of equality and reciprocity," said Atty Lat. "We deserve to be more than just a nation of beggars and servants panhandling for Japanese waste."

The JPEPA, a preferential trade treaty signed in September 2006 by President Gloria Arroyo and then Japanese Prime Minister Junichiro Koizumi in Helsinki, will need to be ratified by the Senate. It is widely seen as the first test of the relationship between the Arroyo administration and the new Senate dominated by the opposition.

Several senators have already come out strongly against the JPEPA. Senator Loren Legarda said that "the benefits in the JPEPA are more apparent than real and largely ignorable if we are to compare it to the destruction of our environment... Without mincing words, this treaty should be sacked."

Senator Pia Cayetano has also called instead on the Senate to ratify first the Basel Ban Amendment before discussing the JPEPA. "Ratifying the Basel Ban Amendment would provide greater protection to the Philippines from becoming a dumping ground for toxic wastes, not only from Japan, but also from other industrial countries," she stressed.

The Basel Ban Amendment, a supplement to the Basel Convention, plugs the convention's loopholes by prohibiting the practice of trading toxic waste for both disposal and recycling.

Posted by Rei Panaligan at Monday, July 16, 2007 No comments: Links to this post 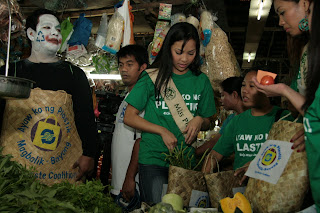 QUEZON CITY, Philippines- Champion women and activists for the environment call on marketgoers and the public to minimize the use of plastic bags and instead use the traditional bayong, basket and other reusable materials to do their shopping.


The “green” queens composed of Miss Philippines-Earth Jeanne Harn, Miss Philippines-Water Joyce Nocomura, Miss Philippines-Ecotourism Ana Katrina Bautista, and former Miss Philippines-Earth Cathy Untalan, human rights activist and Akbayan Representative Risa Hontiveros-Baraquel, “Boy Bayong” and members of the EcoWaste Coalition bought fruits, vegetables and other goods using bayong, cloth bags and other reusable containers at the Nepa Q-Mart in Quezon City. The goods they bought were donated to the Department of Social Welfare and Development (DSWD) Reception and Action Center.
“Every rainy season, thousands of Filipinos are besieged with floods due to waterways clogged with plastic bags, styrofoam and other disposable materials. Children are forced to wade in dirty water going to school while many communities suffer from rat and pest infestations all because of our own garbage,” said Harn in a statement.

“But, we can be a part of the solution. Taking and using reusable carry bags to the supermarket, palengke or sari-sari store is a friendly gift to our environment,” she further said.

According to the latest monitoring of the 15 large pumping stations in the metropolis by the Metro Manila Development Authority (MMDA), there was a drastic increase in the volume of garbage collected in 2005 from 13, 988 cubic meters to 18,796 cubic meters. Major rivers and tributaries in Metro Manila like the Pasig, Marikina, and Tullahan Rivers have been clogged with mixed waste, mostly plastics.
In the discard survey facilitated by EcoWaste Coaliton and Greenpeace in Manila Bay in 2006, 76% of the garbage collected were plastics and 51% of these are single-use disposable plastic bags.
"We have to rethink our lifestyle and minimize our demand for plastics and disposable items. Let us support the choices that provide health and ecological benefits as well as financial savings and aesthetic advantages," said Troy Lacsamana of the Task Force Plastics of EcoWaste Coalition.
The EcoWaste Coalition calls on the Congress to pass laws to regulate the production and use of plastics while giving incentives to promote earth-friendly containers. Akbayan Party-list through Baraquel filed a bill in Congress to minimize the production and use of single-use plastics and disposable plastic wares. The ecogroup also welcomes the initiatives of different establishments to encourage the public to minimize the use of plastic bags or other disposable materials.
The Balik Bayong event also drew the participation of Concerned Citizens Against Pollution, Global Alliance for Incinerator Alternatives, Greenpeace Southeast Asia, Health Care Without Harm, Kaalagad Katipunang Kristiyano, Miriam P.E.A.C.E., Mother Earth Foundation, November 17 Movement, Sagip Pasig Movement and Zero Waste Philippines.
For more information, please call Troy Lacsamana at

or the EcoWaste Coalition at

Posted by Rei Panaligan at Friday, July 13, 2007 No comments: Links to this post