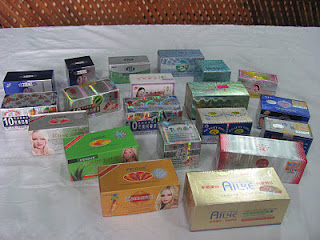 The EcoWaste Coalition, an advocate for chemical safety and zero waste, gave the thumbs up to a fresh directive by the government enlarging the list of banned cosmetic products laden with mercury.

The Food and Drug Administration (FDA) today posted on the agency's website an advisory listing a total of 71 skin whitening creams that were found to contain highly toxic mercury above the allowable limit of 1 part per million (ppm) in direct violation of Republic Act No. 9711, the FDA Act of 2009, and Republic Act No. 7394, the Consumer Act of the Philippines.

Dr. Go, an internist specializing in clinical pharmacology and toxicology, warned that “consumers who are directly exposed to cosmetic products containing more than 1 ppm run the risk of possible toxicity.”

Consumers who may have been exposed to highly toxic mercury in cosmetics are advised to seek professional advice or help in medical clinics, health centers or hospitals, the advisory said.

“We laud the FDA for its latest action to protect consumers against mercury exposure from dangerous contraband cosmetics that continue to penetrate the local market,” state Aileen Lucero of the EcoWaste Coalition’s Project Protect.

“With its newest health directive, the FDA may have set a world record of banning the most number of mercury-laden skin lightening products, a good indicator of the agency’s resolve to promote and protect the people's health against mercury despite its budgetary and manpower limitations,” she said.

In 2004, the Indonesian Food and Drug Control Agency issued a warning against 51 brands of personal care products for containing mercury and other dangerous chemicals, noted the EcoWaste Coalition.

Included in the FDA’s list of 71 banned products were 20 items found by the EcoWaste Coalition’s AlerToxic Patrol (14 in 2012 and 6 in 2011) that subsequently tested with excessive levels of mercury such as Ailke Perfect Salvation Rosy Whitening A and B Cream with 63,516 ppm of mercury, Maidaifu Herbal Moisturizing Cream Wrinkles Harmonie Cream with 47,891 ppm, Bai Li Tou Hong Cream with 34,177 ppm, Feique Golden Aloe Whitening (Anti-Scar, Anti-Freckle) Cream with 28,806 ppm and Miss Beauty Magic Cream with 28,600 ppm.

The full list of the 71 banned mercury-containing skin whitening products can be viewed at:

To assist the FDA in its work, the EcoWaste Coalition will deploy this week its AlerToxic Patrol to monitor vendors' compliance to the agency’s latest directive.

The group will also distribute posters and copies of the FDA's advisory to Chinese drug stores, cosmetics shops, health supplements stalls and other retail outlets to encourage them to voluntarily obey the directive.

It will later publish a comics-type material that will promote “brown is beautiful” and encourage consumers to seek out duly tested, registered and labeled personal care products with no mercury and other injurious ingredients,

Since mercury in cosmetic products will eventually find its way in the environment and contaminating the food chain, both the FDA and the EcoWaste Coalition cautioned against improper disposal of mercury-laden articles.

The FDA has advised consumers in possession of mercury-laced cosmetic products to call the agency about proper disposal to protect human and animal health, and the environment.