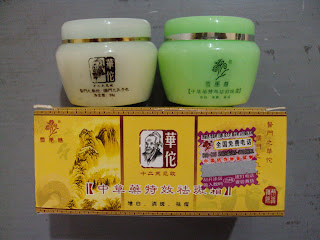 The EcoWaste Coalition has notified the Food and Drug Administration (FDA) regarding the illicit sale of one more unregistered skin whitening cosmetic in Chinatown that is laden with toxic mercury.

The product, which is not listed in the FDA’s database of goods with cosmetic product notifications, is likewise available at Ton Ren Tang Chinese Drug Store at Sabino Padilla St., also in Binondo.

The group then screened the product using a handheld X-Ray Fluorescence (XRF) to determine its compliance with the maximum allowable limit of one part per million (ppm) for mercury in cosmetics under the ASEAN Cosmetic Directive.

“We have requested the FDA to issue a public health advisory to dissuade consumers from buying this mercury-laced cosmetic, which can put them and their family members at risk of mercury exposure,” said Thony Dizon, Coordinator, EcoWaste Coalition’s Project Protect.

The group had earlier provided the FDA with a sample of unregistered Jiachuntang Ban Gan Jing Qu Ban Shuang, which the agency subsequently banned in August 2016 for containing mercury beyond the 1 ppm limit.

“Unknown to consumers, there are unscrupulous manufacturers and traders that add mercury salts in cosmetic products to inhibit the formation of skin melanin, which will result to lighter skin tones, the FDA said.

The FDA has repeatedly warned retailers against selling unnotified cosmetics laced with toxic mercury and other harmful substances, which contravenes Republic Act 9711, or the Food and Drug Administration Act.

According to the “Mercury in Skin Lightening Products” fact sheet published the World Health Organization (WHO), “the main adverse effect of the inorganic mercury contained in skin lightening soaps and creams is kidney damage.”

It said that “mercury in skin lightening products may also cause skin rashes, skin discoloration and scarring, as well as a reduction in the skin’s resistance to bacterial and fungal infections.”

Mercury exposure may also lead to “anxiety, depression or psychosis and peripheral neuropathy,” said WHO, which has listed mercury among the “top ten chemicals of major public health concern.”

The EcoWaste Coalition urged consumers to insist on their right to product information, including the ingredients that make up a product, noting that Xuemeiting labeling information is almost entirely in Chinese in violation of the Consumer Act of the Philippines.

The group also urged the cosmetic industry to abide by the Philippine and ASEAN policy on mercury in cosmetics, which is in sync with the objective of the Minamata Convention on Mercury that the Philippines signed in October 2013.

The treaty, which the government has yet to ratify, seeks “to protect the human health and the environment from anthropogenic releases of mercury and mercury compounds.”