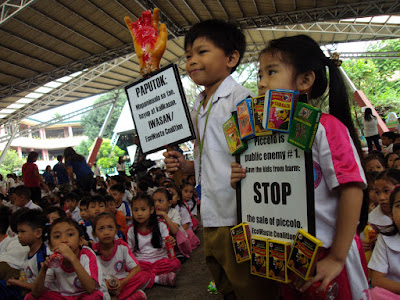 A waste and pollution watchdog reminded the public, especially young children and teenagers, not to spend the Christmas gifts they have received to buy firecrackers and other pyrotechnic devices.
The EcoWaste Coalition, a civil society partner in  the ongoing drive by the Department of Health (DOH) towards an injury-free celebration, aired the appeal as the number of firecracker-related injuries climbs with the fast approaching New Year.
“We would like to again remind our kids and teens that firecrackers are not toys.  Please don’t be tempted to spend the money given by your godparents and others to buy banned piccolo and other firecrackers, which can put your lives in danger,” said Aileen Lucero, National Coordinator, EcoWaste Coalition.
“We address this appeal to kids and teens and their parents as most of the victims in last year’s revelry were young people,” she added.
According to the last DOH report, 500 of the 920 firecracker-related injuries involved children less than 14 years.
The top fireworks that caused injuries were piccolo (42 percent), kwitis (11 percent), luces (6 percent) and 5-star (4 percent).  Unknown firecrackers accounted for 11 percent of the injuries recorded.
“We also appeal to all conscientious vendors not to sell firecrackers to kids and teens who are most prone to accidental injuries.  The life you save maybe that of your own son or daughter.  There must be a safer way to earn money during the holidays without jeopardizing the wellbeing and future of our youth,” she said.
The EcoWaste Coalition also reiterated their appeal to households and commercial establishments to donate the money set aside for firecrackers and fireworks to charitable causes.
“Instead of burning money for dangerous, deadly and dirty firecrackers and fireworks, please make donations to the victims of typhoon Nina in the affected provinces in the Bicol and Southern Tagalog regions,” she suggested.
“Our little acts of charity can alleviate the sufferings of the Christmas typhoon victims,” she emphasized.
On Wednesday, December 28, the EcoWaste Coalition, in collaboration with animal welfare groups, will hold a “Pet-A-Thon” at Quezon Memorial Circle to encourage the public not to use firecrackers for the sake of animals who suffer a lot from the loud, ear-splitting noise.
On Friday, December 30, the group will organize a community parade in Barangay Project 6, Quezon City to show off alternative pollution-free noisemakers for the New Year revelry that can be used in lieu of firecrackers.
-end-
Reference:
http://apir.doh.gov.ph/upload/apirreportasof6amjan062016_ver2.pdf