No Such Thing as "Clean Incineration," Wastes Experts Say 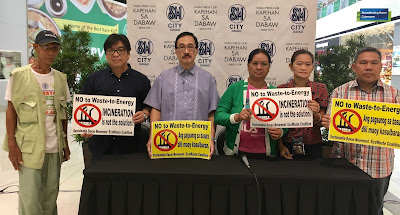 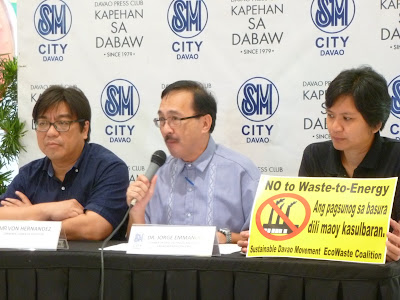 Wastes experts debunked claims that the incinerator technology in facilities like waste to energy (WtE) plants are environment-friendly, saying that these power plants still produce toxic pollutants that need to be handled properly.

"All incinerators release toxic particulates, toxic gases such as carbon dioxide and carbon monoxide, toxic metals such as lead and mercury and other pollutants in addition to dioxins, including 2,3,7,8-tetrachloro-dibenzo-p-dioxin, the most toxic compound known in science," he said.

Emmanuel, who is in Davao today to headline a public forum on Waste-To-Energy Technology , organized by the Sustainable Davao Movement ,  the EcoWaste Coalition and the Ateneo University Community Engagement and Advocacy Council (UCEAC) at the Ateneo de Davao University, also noted that the Philippines does not have the technical in-country capability to carry out regular testing of dioxins from incinerators and to conduct frequent independent spot checks of facilities in order to enforce current dioxin limit standards.

"The use of pollution control devices such as filters and electrostatic precipitators merely move the pollutants from the air into the waste water or the solid filters. These pollutants do not disappear; they are concentrated into other media that must still have to be treated as hazardous waste,” he said.

"It is lamentable that national government agencies are still pining for costly magic bullets to solve or waste problems, when proven, safe and sustainable solutions are already enshrined in our existing policies,” said Hernandez who was founding convenor of the Quezon City-based EcoWaste Coalition.

"The real question is whether our officials have the political will and the creativity to move our society away from dirty and polluting waste management systems towards material recovery options that generate jobs for our communities. This is the unfulfilled promise of the 15 year old R.A. 9003, or the Ecological Solid Waste Management Act, whose implementation remains hostage to government ineptitude and vested interests," he said.

For his part, Thony Dizon, Project Protect Coordinator of the EcoWaste Coalition, reiterated the need for national and local government agencies, as well as the general public, “to take extra steps to put the waste prevention and reduction provisions of R.A. 9003 in force, such as the segregation-at-source, which if genuinely implemented, will facilitate the optimum reuse, recycling and composting of discards for cleaner, healthier and sustainable communities.”

The Sustainable Davao Movement said that the Public Forum is geared towards providing Dabawenyos a venue to raise and clarify their issues and concerns on technologies such as the WtE.
Email Post