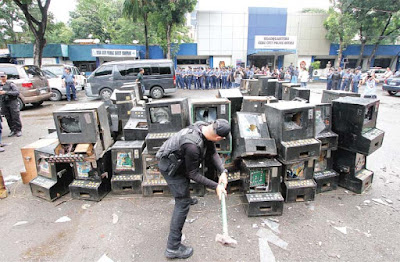 While lauding the local police for their campaign against illegal gambling activities, the group expressed concern over the unsafe manner of manually destroying the gaming machines, notably the TV sets, which contain large quantities of hazardous substances.

“We understand that the confiscated TV sets are destroyed for good to prevent their reuse for illegal gambling activities, but this should not be in a manner that will scatter the lead and their other hazardous substances, which can endanger human health and the environment,” stated Thony Dizon, Coordinator of the EcoWaste Coalition’s Project Protect.

Cadmium, lead and mercury belong to “top 10 chemicals of major public health concern,” according to the World Health Organization.


Citing information from the report “Poison PCs and Toxic TVs,” each computer or television display contains an average of 4 to 8 pounds of lead (with the) monitor glass contain(ing) about 20% lead by weight.”

“When these components are illegally disposed and crushed in landfills, the lead is released into the environment, posing a hazardous legacy for current and future generations…  These heavy metals and other hazardous substances found in electronics can contaminate groundwater and pose other environmental and public health risks,” the report said

Instead of breaking the illegal gambling devices with axes and sledgehammers, the EcoWaste Coalition urged the police authorities to send the seized items to registered hazardous waste treatment, storage and disposal (TSD) facilities for proper dismantling and recycling in controlled conditions.

The Department of Environment and Natural Resources – Environmental Management Bureau has accredited several TSD facilities in the province of Cebu.

The EcoWaste Coalition warned that the burning, dumping and unsafe recycling of electronic waste can pose serious health risks to workers, residents and others due to the release of highly toxic pollutants, including dioxins and flame retardant chemicals that can disperse over long distances and remain in the environment for a long time.