Not All Pokemon-Inspired Toys are Safe for Kids – EcoWaste Coalition 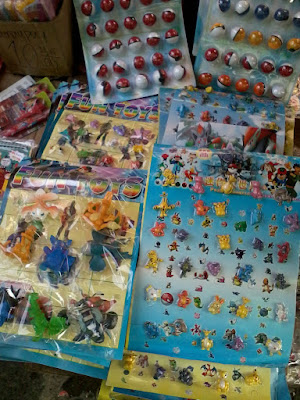 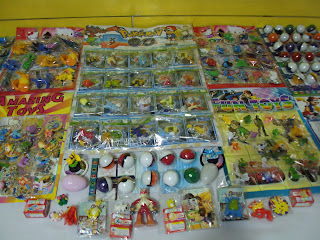 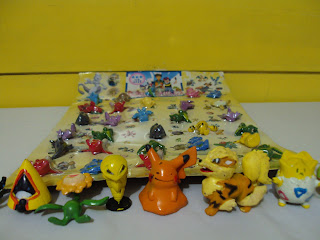 With the onset of the “ber” months, a watch group tracking health-damaging chemicals in children’s toys advised parents to be on the lookout for Pokemon-inspired toys that could pose chemical and choking risks.

“Not all toys cashing in on the immensely popular Pokemon are created equal.  Some are laden with toxic lead, many are too small for little children to safely play with and most, if not all, are improperly labeled.  Parents and kids need to exercise caution to reduce potential chemical and choking hazards from such toys,” said Thony Dizon, Coordinator, EcoWaste Coalition's Project Protect.

“These words of advice are not meant to throw cold water on the Pokemon craze, but simply to remind consumers to be on their toes,” he added.

The EcoWaste Coalition aired the toy safety alert in the wake of its pre-Christmas screening of 225 plastic Pokemon figures, which the group bought on August 29 to 31, 2016 from toy vendors in Lucky Chinatown Mall (Annex) and Divisoria Mall in Manila City, as well as from stores outside public elementary schools in Makati and Quezon Cities.  These repacked toys are sold from P5 up per unit.

Out of 225 samples, 38 were found to contain lead concentrations ranging from 132 to 6,880 parts per million (ppm).  Lead is prohibited in the production of children’s toys as per DENR Administrative Order 2013-24, or the Chemical Control Order for Lead and Lead Compounds.

A portable X-Ray Fluorescence (XRF) device was used to screen the samples for toxic metals like lead, which is known to interfere with a child’s developing brain and cause health and developmental problems even at very low exposures.

The EcoWaste Coalition likewise expressed deep concern over the smallness of most Pokemon figure toys that may pose choking or ingestion hazard when used by kids under three years of age and played without adult supervision.

The group specifically drew attention to the small parts of Poke balls, which are used to catch and store Pokemon.

“The Pokemon toys inside the Poke balls measure only 2 cm and look like Gummi Bear candy,” Dizon said.

“It’s  very important for parents to be watchful of toys with small parts as kids may suffer from choking or swallowing small objects that can block the passage of air and cause serious injuries and even deaths,” he said.

A “small part,” as defined by the US Consumer Product Safety Commission (CPSC), “is any object that fits completely into a specially designed test cylinder 2.25 inches long by 1.25 inches wide that approximates the size of the fully expanded throat of a child under three years old.”

A “small part,” in this sense, can be a whole toy or article, a separate part of a toy, game, or other article or a piece of a toy or article that breaks off during testing that simulates use or abuse by children, according to the CPSC.

The EcoWaste Coalition also took the opportunity to urge the authorities to fast track the promulgation of the Implementing Rules and Regulations of Republic Act 10620, or the Toy and Game Safety Labeling Act of 2013.

R.A. 10620 seeks to “ensure the protection of children against potential hazards to the health and safety by requiring special labeling of toys and games.”

The law requires “all toys and games, locally or internationally manufactured, that are imported, donated, distributed and sold in the Philippines (to) comply with the appropriate provisions on safety labeling and manufacturer’s markings found in the Philippine National Standards (PNS) for the safety of toys.”

“A balloon, ball, marble, or toy or game which packaging is not in compliance with the requirements of this Act shall be considered a misbranded or banned hazardous substance (and) shall be withdrawn from the market at the expense of the manufacturer or importer,” the law said.

The group appealed to the authorities to release the IRR of R.A. 10620 immediately before consumers go on toy shopping spree this Christmas.