DENR Sec. Lopez Urged Not to Open Floodgates for Technologies that Burn Discards 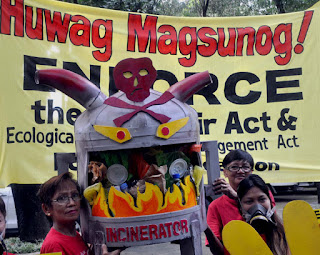 Resolution 669, which the National Solid Waste Management Commission (NSWMC) adopted on June 9, 2016 before Lopez took over the DENR, provides for the “Guidelines Governing the Establishment and Operation of WtE Technologies for Municipal Solid Wastes.”

As DENR Secretary, Lopez serves as concurrent chairperson of the NSWMC, which is tasked to oversee the implementation of solid waste management plans and prescribe policies to achieve the objectives of Republic Act 9003, the Ecological Solid Waste Management Act.

“We admire Sec. Lopez’s passion to protect Mother Earth, but embracing WtE technologies that incinerate discards is not the way to go as this is contrary to her vision for a ‘cleaner, healthier and happier’ Philippines,” said Aileen Lucero, National Coordinator, EcoWaste Coalition.

“We request her to revoke NSWMC Resolution 669 and instead pursue pro-people Zero Waste solutions to clean up and restore the environment, while creating life-sustaining recycling jobs and enterprises,” she said.

Through a petition e-mailed to the Office of the DENR Secretary on September 22, over 60 groups and individuals expressed dismay over the adoption of the said resolution “as this could open the floodgates for WtE plants that burn waste materials, undermining community efforts toward a Zero Waste and toxic-free society.”

A related petition signed by groups belonging to the Green Convergence for Safe Food, Health Environment and Sustainable Economy and the Green Thumb Coalition was also submitted to Lopez last September 1.

The latest petition was signed on September 20 following a forum on the environmental and health impacts of thermal WtE technologies with resource person Dr. Jorge Emmanuel, an adjunct professor at Silliman University and a Balik Scientist of the Department of Science and Technology (DOST).

“Republic Act 8749 or the Clean Air Act of 1999 prohibits the incineration of municipal, biomedical and hazardous wastes, which process emits toxic and poisonous fumes, while Republic Act 9003 or the Ecological Solid Waste Management Act of 2000 requires the adoption of best environmental practices in ecological waste management excluding incineration,” the petition stated.

“Gasification, plasma arc, pyrolysis, cement kiln co-processing and other burn WtE technologies go against the  incineration ban under RA 8749 and run counter  to the ecological solid waste management  promoted by  RA 9003,” it pointed out.

According to the petition, “burn WtE technologies tolerate the generation of more wastes and their disposal to ensure nonstop supply of feedstocks to make facility operations profitable,” adding that, “the use of mixed wastes as feedstocks discourages  resource conservation, segregation at source, reusing, recycling and composting.”

“Burn WtE facilities convert mixed discards into  toxic ash requiring special disposal as hazardous waste as such ash is contaminated with dioxins and other persistent organic pollutants, mercury, lead and other toxic metals and other harmful substances,” it said.

The petition emphasized that “burn WtE plants discharge extremely toxic pollutants to the air, water and soil, particularly dioxins that are formed by burning chlorine-based chemical compounds with hydrocarbons, that the government has no capability to monitor on a continuous basis.”

“Investments in waste prevention and reduction, source separation, extended producer responsibility, informal recycling sector and other initiatives will lead to a progressive reduction on the volume and toxicity of waste sent for disposal,” it  further said.