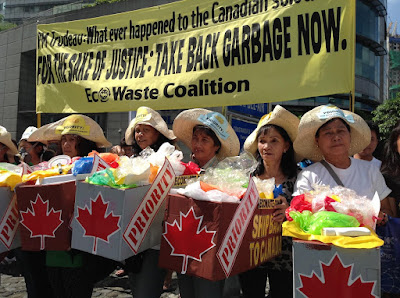 Green groups lauded the decision by a government inter-agency committee to re-export illegal garbage shipments to Canada as a triumph for national dignity and a victory for environmental justice.

Last Monday, the committee, comprised of the Bureau of Customs and the Departments of Environment and Natural Resources, Foreign Affairs and Justice, agreed to enforce the ruling by Manila magistrate Tita Bughao-Alisuag ordering the re-export of 50 forty-footer containers of garbage back to Canada at the expense of Chronic Plastics, Inc., the importer.

Aileen Lucero, one of the intervenors in Criminal Case No. 14-311191 for violation of Republic Act 6969 (Toxic Substances and Hazardous and Nuclear Wastes Control Act) commended the court order issued on June 30 and the decision of the interagency committee on September 5 to implement it.

“After a relentless campaign to send the illegal garbage back to Canada, we are finally beginning to see the fruits of our collective labor.  The government’s decision to enforce the court order is a triumph for national dignity and a victory for environmental justice.  We support it and we ask all Filipinos to rally behind it as this is for the common good,” said Lucero who is also the National Coordinator of the EcoWaste Coalition, a chemical safety and zero waste advocacy group.

“This goes to show that our justice system is still a bastion of national sovereignty.  May this send a forceful reminder to corrupt public officials and private citizens who mean to profit out of perpetuating the violation of our Constitution as well as national environmental laws that our justice system is a champion of the environment as well as the fundamental law of the land and we, environmental justice movements, will always be its vigilant ally,” said environmentalist Raphael Lopez, another intervenor.

“As it’s not over till it’s over, we vow to remain vigilant until the last garbage container is shipped out to Canada,” Lucero emphasized, noting that the court order covers only  50 of the 103 shipping containers filled with residual and hazardous trash.  “Our nation’s success in fulfilling the court order will send a clear signal to unscrupulous waste traders that the Philippines is not a global dumpsite,” she added.

In 2013-2014, a total of 103 shipping containers of largely residual household garbage declared as scrap plastics for recycling were illegally sent to the Philippines from Canada.  In 2015, garbage from 26 of these containers was unlawfully dumped on a private landfill in Tarlac, infuriating provincial officials and residents.

“Local authorities and communities hosting disposal facilities can now breathe a sigh of relief following the court order as the reeking garbage must now be re-exported to Canada and not disposed of locally,” noted Noli Abinales, President of Buklod Tao, which co-organized a peaceful rally versus garbage dumping outside the Canadian Embassy last June 28.

Zero waste groups have underscored that “the disposal of the Canadian garbage in local landfills, cement kilns and waste-to-energy facilities will be totally wrong and unacceptable.”

"The decision of the government inter-agency is a development we have all been waiting for. But, we should not forget that there are 53 container vans that are not covered by this decision, and five more are still unaccounted for. While this is no doubt a victory for the Filipino people, the fight is far from over. Unless the Philippine government ratifies the Basel Ban Amendment, the same incident will happen and the country will continue to be a recipient of hazardous waste from richer countries, like Canada, under the guise of recycling. A troubling precedent is what we aim to avoid,” said Abigail Aguilar, Detox Campaigner, Greenpeace.

“BAN Toxics welcomes the decision of the interagency committee as a step towards the right direction—upholding our sovereignty and protecting Filipinos and our environment.  But while it is a good decision—kulang pa.  Much more needs to be done. The decision covers only 50 out of the total 103 containers shipped and it took around three years for the government to decide to send the trash back,” stated Anna Kapunan, BAN Toxics campaigns and advocacy specialist.

“The government should take urgent steps to include all the remaining containers in the re-export, and ensure that the Philippines is protected from further trash imports through a mechanism that doesn’t take years and a local court case to enact.  We urge the Senate to ratify the Basel Ban Amendment to give the country immediate protection through an international mechanism that compel countries like Canada to stop shipping waste to poorer countries. We also urge the Filipino people to be vigilant and ensure the order is fulfilled, the rest of the trash sent back and that Filipino taxpayers do not shoulder the expense for the re-export of the waste,” she said.