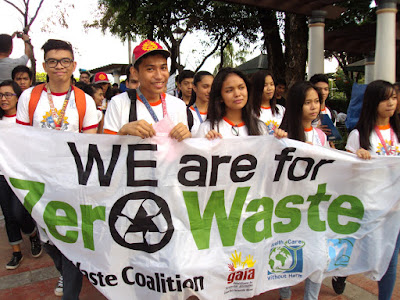 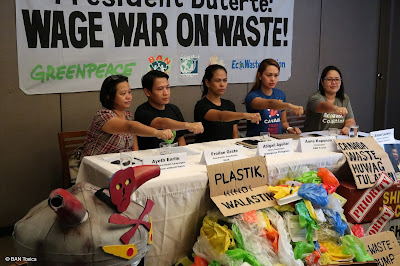 Green groups today urged President Rodrigo Duterte to wage a "War on Waste" and lay down an ecological and just waste and pollution prevention and reduction regime that protects public health and the environment a matter of national priority.

At a press conference in Quezon City, the groups exhorted the government to fast track the promulgation of policies, regulations and plans that it vowed to do to safeguard human health and the environment from the onslaught of wastes and pollutants.

The groups, composed of BAN Toxics, EcoWaste Coalition, Global Alliance for Incinerator Alternatives, Greenpeace and Health Care Without Harm, represent the waste cluster of the Green Thumb Coalition (GTC), a broad alliance of Philippine environmental NGOs. Last April 2016, along with other "presidentiables" then-Mayor Duterte ranked as the third most progressive presidential candidate based on GTC's environmental survey questionnaire.

The groups recalled that last April 18, in response to GTC's pre-election questions, then presidential aspirant Mr Duterte wrote: "these (survey  responses) will be translated into a program of action with specific activities implemented and/or initiatives started in the first six months of the Duterte administration."

September 27 marks President Duterte's 90th day in office. However, halfway into his first six months, the groups observed that addressing waste issues do not seem to figure as among the administration's top priorities. Among the issues cited were: solid waste and plastics pollution, thermal waste-to-energy facilities, pollution prevention, electronic waste and the Canada waste issue.


"Having laws that outline the country's waste pollution problems are not enough if serious implementation is lacking. Rather than curing the problem with stop-gap measures, we urge the Government of the Philippines to address pollution through prevention measures at source, such as a pollution disclosure policy required of industries. Public access to information on industrial emissions not only identify problems at source, but also address the people's right to know.  Similarly, looking into requiring closed-loop production of electronics would minimize negative effects on the informal waste sector by requiring manufacturers who profit the most to also take responsibility for the e-wastes generated," said Abigail Aguilar, Greenpeace Detox Campaigner.

“We hope that this government will take plastic pollution, particularly its leakage into our waterways and marine environment, more seriously, and hold manufacturers and producers into account.  The proliferation and increase of single-use, disposable plastic products and packaging and its problematic disposal increase the burden of already-taxed local governments to deal with these problematic products on their own, as well as pave the way for the highly-toxic burning of plastic residuals in cement kilns and drive the irresponsible call to lift the incineration ban.  We call on the President to include a national ban on single-use plastic bags among his top legislative priorities,” stated Froilan Grate, Asia-Pacific Coordinator, Global Alliance for Incinerator Alternatives.

"We hope the President promptly lends support to the "war" Secretary Lopez is waging against enemies of the environment, especially against those who seek to sneak enacting policies such as the ‘Waste-to-Energy’ Guidelines that are deleterious to the environment as well as people's health, and also in clear violation of the Clean Air Act and the Ecological Solid Waste Management Act," said Ayeth Enrile, Medical Waste Campaigner, Health Care Without Harm.


"Before elections, President Duterte was vehemently against Canada's dumping. He now needs to show he is a person of decisive action when it comes to waste," said Anna Kapunan, Campaigner for BAN Toxics. "The President should ensure that all the trash is immediately re-exported, that Canada accepts it, and Filipino taxes are not spent for its return. Also, the President should do as he promised and ensure the Basel Amendment ratification is a priority agenda of the Senate, in order to prevent any future dumping."


“During the last three months, waste concerns have taken a back seat to ‘bigger’ environmental issues and many of the campaign promises related to the enhanced enforcement of Republic Act 9003, the Ecological Solid Waste Management Act, have yet to be realized.  We hope to see real solutions to our garbage woes sans incineration gaining more traction in the coming days and that Secretary Lopez will make good on her promise to go after non-compliant local government units,” noted Aileen Lucero, National Coordinator, EcoWaste Coalition.

The groups enjoined President Duterte and Secretary Lopez to jointly wage the “War on Waste” and for the entire society to support it.