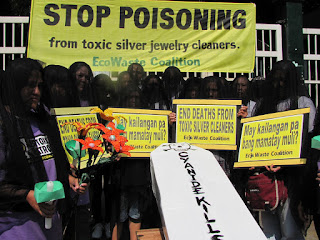 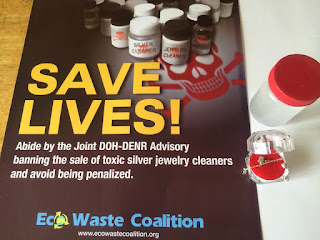 "We commend the City Council for enacting a life-saving ordinance that is consistent with the national goal of averting poisoning incidents, injuries and fatalities" said Thony Dizon, Coordinator of the EcoWaste Coalition's Project Protect.

"Quezon City is the first local government unit (LGU) to pass such ordinance after Health Secretary Janette Garin urged LGUs last April 13 to criminalize the sale and dispensing of cyanide-containing silver cleaning solutions," he pointed out.

"The ordinance will help in preventing cyanide poisoning from the accidental and deliberate intake of this deadly potion that has killed so many people, including young children who mistook it for water and adults who drank it on purpose," he added.

The ordinance strictly prohibits the selling of silver jewelry cleaners containing cyanide and other toxic substances in all silver jewelry shops, street and sidewalk vendors and other retailers operating within territorial jurisdiction of Quezon City.

Violators, upon conviction, shall be fined not less than P5,000 and/or imprisoned for not less than 1 month but not more than 3 months at the  discretion of the Court.  If the violator is a QC-registered business entity, it’s business permit shall automatically be cancelled.

At the prior public hearings, the EcoWaste Coalition drew attention to the human tragedy due to unlawful sale of the toxic mixture, including the death in January 2014 of a young mother from Barangay Sto. Domingo who drank a bottle of silver jewelry cleaner following a domestic quarrel.

The ordinance localizes a joint 2010 directive by the Department of Health (DOH) and the Department of Environment and Natural Resources (DENR) "declar(ing) silver jewelry cleaning solution containing cyanide and other toxic substances as threat to health and safety and reiterate(ing) the strict prohibition on their sale in the market."

According to the DOH, "cyanide found in most silver jewelry cleaning solutions is classified as a poisonous substance liable to cause death or serious injury to human health."

Acute poisoning occurs through ingestion, inhalation or dermal absorption as cyanide is rapidly absorbed by the body, blocking the utilization of oxygen in all organs.

Despite the explicit ban, silver jewelry cleaners remain a top toxicant ranking sixth among top 10 agents for admitted poisoning cases at the Philippine General Hospital in 2014 for both children and adults.