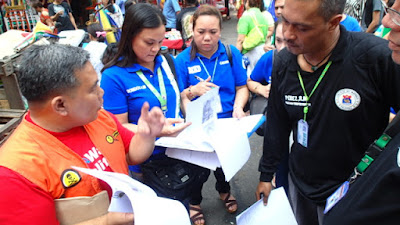 Four Metro Manila local government units (LGUs) received a pat on the back from a watchdog group that has been persistently monitoring the illegal trade of harmful contraband products in the marketplace.

The EcoWaste Coalition gave the cities of Makati, Manila, Marikina and Pasay a resounding thumbs up for their swift action to enforce the directives from the Food and Drug Administration (FDA) banning unregistered cosmetics, household insecticides and slimming products that pose imminent danger to human health.

“Hats off to these LGUs, particularly to their health officers and sanitation inspectors, for implementing the law that led to the seizure of contraband goods that continue to proliferate in the market despite being banned by our health authorities,” said Thony Dizon, Coordinator of the EcoWaste Coalition’s Project Protect.

“We hope that these LGUs will stay on guard against peddlers of these health-damaging goods and severely punish the repeat offenders,” he said.

“With the LGUs on the frontline, we surely can make some headway in curbing the rampant sale of smuggled goods that present a serious hazard to public health and the environment,” he added.

In Makati, on the orders of Acting Mayor Romulo “Kid” Peña, Jr., sanitary inspectors from the Makati Health Department on August 14 seized close to 200 units of unregistered  beauty and slimming products from  retailers in Guadalupe Nuevo.  Among those confiscated were Erna, Jiaoli and S’zitang skin whitening creams containing toxic mercury.   According to Mayor Peña , “unregistered products, especially those made of unknown ingredients and components, could pose danger to the health and even the lives of people.”

In Manila, the EcoWaste Coalition and the Manila Health Department on August 13 jointly swooped down on Divisoria vendors selling unregistered insect sprays and mosquito coils that are considered a menace to humans, as well as friendly insects, seizing six boxes of the contraband insect killers.

The Marikina City Health Office reported to Mayor Del de Guzman on August 28 that based on the inspection conducted 25 retail outlets in five barangays were found to be selling FDA-banned products.    City Health Officer Alberto Herrera promised to conduct a surprise inspection  to ascertain the vendors’ compliance, warning that stores found to be still in breach of the law will be immediately closed and their business permits recommended for cancellation.

In Pasay City, sanitation inspectors were deployed to check on retailers at Baclaran and Libertad that the EcoWaste Coalition found to be selling items with no product notification or registration from the FDA.

The EcoWaste Coalition pledged to continue its market monitoring for dangerous products with the start of the “ber” months, noting the increased traffic of smuggled goods as the Christmas holidays draw closer.