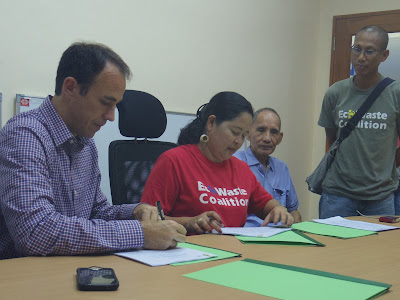 The Catholic Relief Services, the international humanitarian agency of the Catholic community in the United States, has embarked on a new initiative that seeks to cut the volume of trash that ends up in canals and rivers and aggravates the threat of floods.

The CRS Project SUCCESS (Strengthening Urban Communities Capacity to Endure Severe Shocks) aims to strengthen the resilience of vulnerable communities in project sites for them to better withstand the impacts of frequent flooding and other disasters.

“With this endeavor, we hope to reduce the quantity of waste dumped on streets and waterways and promote sustainable SWM livelihoods in the target communities,” said Joseph Curry, CRS Country Representative.

Curry also said that the effort will not only improve current waste management practices, but also boost the asset base and financial resources of households which they can draw upon in times of crisis.

As the SWM contractor, the EcoWaste Coalition shall, among other things, prepare a comprehensive SWM situation of the target barangays, with the aim of assessing and improving the capacities of the benefactor communities toward an effective implementation of ecological solid waste management.

In collaboration with stakeholders, the group will facilitate the formulation of 15 barangay SWM action plans, as well as develop a Materials Recovery Facility (MRF) plan in four chosen project sites.

“Ecological waste management will help build community resilience against perennial flood and sanitation woes as well as augment household income. We are also thrilled to be part of this CRS initiative that will surely energize the enforcement of Republic Act 9003 at the target barangays,”
stated Aileen Lucero, Coordinator, EcoWaste Coalition.

Republic Act 9003, the Ecological Solid Waste Management Act, calls for the “adoption of the best environmental practice in ecological waste management excluding incineration,” and provides for the establishment of “MRF in every barangay or cluster of barangays.”