Groups Troop to the Senate to Press for Ban on Foreign Waste Dumping, Re-Export of Canada Garbage 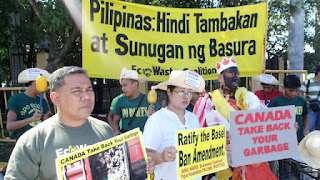 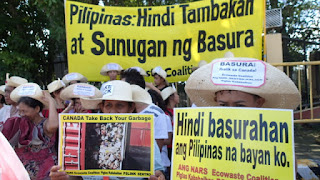 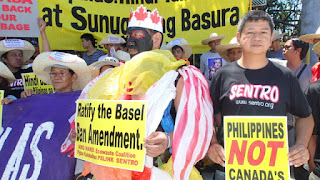 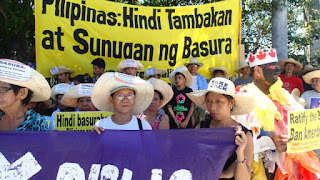 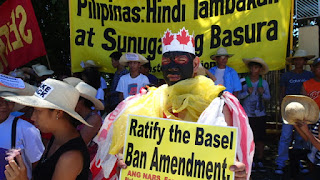 Civil society groups staged a peaceful assembly outside the Senate to demand for robust measures that will prevent the illegal entry of garbage from overseas in the country’s ports.

The event coincided with the Senate hearing in response to the resolutions filed by Senators Maria Lourdes Nancy Binay, J.V. Ejercito, Loren Legarda, Ferdinand Marcos, Jr. and Miriam Defensor Santiago to investigate, in aid of legislation, the still unresolved Canada garbage scandal involving 103 container vans that were unlawfully shipped to the Philippines.

The illegal garbage imports must be shipped back for environmentally sound disposal in Canada in line with Article 9 on “Illegal Traffic” of the” Basel Convention on the Control of Transboundary Movements of Hazardous Waste and Their Disposal,” which also covers “wastes collected from households” like those that were sent to the Philippines under the guise of “recycling,” the groups asserted.

The groups demanded that Canada should act responsibly and comply with the treaty’s requirement that “in case of transboundary movement of hazardous wastes or other wastes deemed to be illegal traffic as the result of conduct on the part of the exporter or generator, the State of export shall ensure that the wastes in question are taken back by the exporter or generator, or, if necessary, by itself into the State of export” as stated in the Basel Convention.

The groups further insisted that the Senate should expedite the passage of legal measures that will proactively prevent foreign waste dumping such as the ratification of the “Basel Ban Amendment,” which prohibits highly industrialized countries from exporting hazardous wastes to developing countries “for final disposal, reuse, recycling and recovery.”

“The ratification of the Basel Ban Amendment will send a strong message to the international community, including private waste traders, that our government does not accept and tolerate hazardous waste dumping and will prosecute offenders to the full extent of the law,” said Ang NARS Party List Rep. Leah Paquiz.

For her part, Annie Geron, President of PSLINK, said: “The Canadian Government and  Philippine Government officials who allowed the garbage dumping to happen should be held accountable,” adding that their “Canadian counterparts in the trade union have taken action to express their protest against their own government’s handling of the issue.”

Stated Josua Mata, Secretary General of SENTRO: “We expect the Senate to exercise its moral authority to enjoin lead government agencies into performing their mandate to protect the national interest and resist the trashing of our nation in the name of free trade. ”

Chemical safety and zero waste advocate Aileen Lucero, Coordinator of the EcoWaste Coalition, further asked the Senate “plug loopholes in current regulations that allow the entry of hazardous waste stream masked as recyclable materials, including imposing stiffer penalties to deter the smuggling of unsorted trash, e-waste and other hazardous discards.”

Lucero also urged the government and the industry to step up the collection of locally-generated plastic wastes that are available in large quantities to reduce reliance on low-quality and unsorted plastic scrap imports, which is against the law.