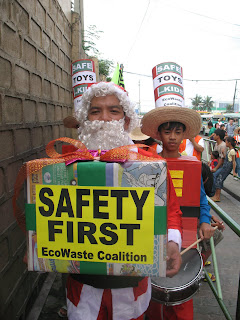 Baclaran, Paranaque City/Pasay City. The EcoWaste Coalition, a health and environmental advocate, today cautioned consumers to be wary of buying dangerous toys in the annual shopping frenzy leading up to Christmas.
In an event dubbed “AlertToxic Day,” Buklod Tao and EcoWaste Coalition volunteers led by "Santa Claus" and flanked by two drummer boys marched along the busy streets of Baclaran bearing a gift wrapped in recycled paper that says “Safety First .” Santa and his helpers exhorted consumers to choose only safe and non-toxic toys this Christmas.
“The EcoWaste Coalition believes that no parent would wish harm on their children,” said Thony Dizon, coordinator of the Coalition's Project PROTECT. “Unfortunately, many parents and other gift givers aren’t aware of the dangers posed by these innocent-looking playthings. As such, they unwittingly expose their children to various health and safety hazards.”
Dangerous toys that pose choking, strangulation, laceration, poking and chemical exposure risks to young children must be avoided, the EcoWaste Coalition pointed out.
Citing information from the Safe Toys Guide, the Coalition warns that many toys in the market today contain harmful ingredients, including major chemicals of concern such as bisphenol-A, brominated flame retardants, cadmium, chlorinated paraffins, chromium, formaldehyde, lead and phthalates, which act as softeners for polyvinyl chloride (PVC) .
For example, lead, which is most commonly found in paint, is known as a major environmental health hazard that can have wide-ranging effects on a child’s development and behaviour. Exposure to even small amounts of lead can cause hyperactivity, irritability and attention disorders in children, while those exposed to higher lead levels may develop problems with reading and learning. They may also experience delayed growth and hearing loss.
“There is no excuse for manufacturing goods containing toxic materials that can jeopardize children’s health and development,”Roy Alvarez, President of the EcoWaste Coalition said. “It is doubly inexcusable when these items are targeted towards children, because they are the ones most vulnerable to such poisons.”
The Coalition urged the government to proactively safeguard consumers from hazardous products by conducting regular tests on toys and child care products being sold in the market. It also pushed for the recall of products that put the health and safety of children at risk.
The EcoWaste Coalition also encourages consumers to read the labels on toys before buying them. According to the Department of Health’s Administrative Order 2007-0032, all locally produced and imported toys should include a duly registered name and trademark, a model reference number, the manufacturer or distributor’s name, and the place, country and year of manufacture, as well as warnings and precautionary indications.
Consumers should also look for the manufacturer’s License to Operate (LTO) number which indicates that the toy has complied with the DOH’s documentary requirements. Information on the safe usage of the toy and the minimum age required should also appear on the packaging.
“We strongly urge the Philippine government to implement labelling laws, especially for toys and other children’s goods,” added Alvarez. “It is especially important to list the chemical contents of toys on their packaging because the public has the right to know exactly what they’re buying.”
The EcoWaste Coalition recommended giving homemade gifts, food items, books, and school supplies as alternatives to traditional store-bought gifts. Parents could also build stronger ties with their kids by giving them the gift of experience in the form of concerts, shows and other educational activities.
“As parents and caregivers, we can show our love for our children by becoming more aware of what we buy for them this Christmas. The best gift we can give them is the gift of a safe and toxics-free future. That’s the real gift that keeps on giving,” the EcoWaste Coalition said.