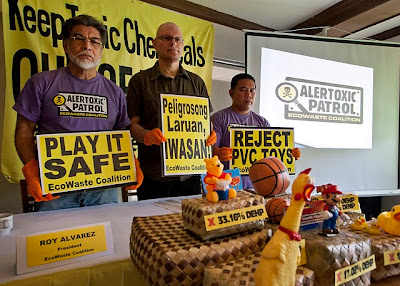 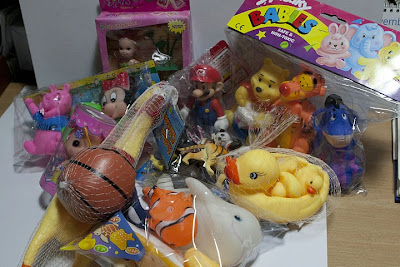 (Test Results Show 6 out of 7 Toys Have Toxic Plastic Additives, Despite Government Health Warning)
Quezon City. Shopping for toys as Christmas presents? Be careful not to buy toys laced with harmful substances that can put the health and future of young children at risk.
The EcoWaste Coalition made this pre-Christmas warning at a press conference to announce the results of the laboratory test it had commissioned that detected the presence of toxic additives known as phthalates (pronounced as "tha-lates”) in six out of seven polyvinyl chloride (PVC) toys bought locally and sent abroad for chemical analysis.
The Philippine government as early as 1999 has raised serious concerns about phthalates. Through the Bureau of Food and Drugs (BFAD) Advisory 99-05 issued on December 23, 1999, the government warned that “phthalates may cause adverse health effects such as liver and kidney wounds, reproductive abnormalities and immune system defects.”
BFAD (now known as the Food and Drug Administration) noted the particular concern over PVC toys and requested manufacturers and retailers to voluntarily halt the sale of soft PVC toys and infant care products for infants/children under 3 years of age.
“The results of our investigation show that the government request to voluntarily stop the production and sale of these harmful toys has been ignored and this provides a compelling reason for stronger action by the Aquino government," said Thony Dizon, Coordinator of the EcoWaste Coalition’s Project PROTECT (People Responding and Organizing against Toxic Chemical Threats).
"We therefore urge P-Noy to introduce a robust policy, building on BFAD Advisory 99-05, that will reduce incidences of toxic exposure from phthalates, which can seriously affect children’s health,” he added.
Phthalates are synthetic chemicals added to polyvinyl chloride (PVC) plastic to make it soft and flexible. “Alternative plastics and other materials do not require toxic chemicals for flexibility and this gives consumers a cost-effective, safer option,” stated visiting scientist Dr. Joe DiGangi, science and policy adviser of the International POPs Elimination Network (IPEN).
The toxic watchdog bought the assorted toys last month from various stores in Divisoria, Manila’s sprawling bargain-hunters’ paradise, and had them analyzed for phthalates at Intertek Thailand through Intertek Testing Services Philippines, Inc.
The toy samples include a doll toy (the only sample that passed the test), a squeeze ball, a shrilly chirping chicken toy, a floating duck toy, a tiger toy, a “Super Mario” toy, and a squeaky “Winnie the Pooh” toy, all imported from China, with prices ranging from PHP18.00 to PHP150.00.
None of them were labeled as containing phthalates and only one (the “Super Mario”) was labeled as being made of PVC. (Images of toy samples may be viewed at www.ecowastecoalition.org.)
Laboratory analysis showed that six of the seven toy samples failed the 0.1% by mass limit set by the US Consumer Product Safety Improvement Act of 2008 for children’s toys and child care articles. As of yet, the Philippines has no specific standard on phthalates.
Test results indicated high levels of diethyl hexyl phthalate (DEHP), a reproductive toxicant, and di-iso-nonyl phthalate (DINP) in six samples in the range of 2.27% to 33.16%, way beyond the 0.1% by mass threshold. Dibutyl phthalate (DBP), benzyl butyl phthalate (BBP), di-iso-decyl phthalate (DIDP) and di-n-octyl phthalate (DNOP) were also detected, but below the limit.
The phthalates measured in this survey have already been banned in children’s toys by US and European governments to prevent kids' exposure to these toxic chemicals.
The toxic watchdog expressed concern that phthalate-tainted toys continue to flood the market despite a decade-old government warning on the health hazards posed by plastic toys.
Last year, the EcoWaste Coalition pushed for a ban on phthalates at a Congressional hearing convened by the Committee on the Welfare of Children, then chaired by Rep. Monica Prieto Teodoro. The hearing resulted in the adoption of a substitute bill recommending a ban on toys and child care articles containing DEHP, DBP, BBP, DINP, DIDP and DNOP “in concentrations greater than 0.1 percent by mass of the plasticized material.”
To protect Filipino children from phthlates in toys, the EcoWaste Coalition has put forward these recommendations:
} For Government: draw up strong policy banning phthalates in toys and child care products.

} For Retailers: sell only toys that have been tested and have passed toxic regulations.

} For Consumers: ask, demand and patronize only safe toys for children.

Report on the Congressional Hearing on the Proposed Banning of Phthalates in Toys and Child Care Articles:
http://www.congress.gov.ph/committees/commnews/commnews_det.php?newsid=1223

Excerpts from “Safe Toys Guide,” published by the Women in Europe for a Common Future (WECF), coordinator of the Safe Toys Coalition, which includes the EcoWaste Coalition and the Global Alliance for Incinerator Alternatives, as Philippines members.
1.Less is more! Buy fewer toys, aim for quality over quantity.
2.Avoid very cheap toys because they often contain more hazardous chemicals.
3.Do not buy a toy with a strong chemical or perfumed smell or if it feels uncomfortable to the touch.
4.For young children, make sure that no small parts can be pulled off and swallowed.
5.Unpack any new toy and leave it outdoors to let some of the hazardous chemicals to evaporate.
6.For dolls: buy rag dolls and wash stuffed dolls before use.
7.For cuddly toys: look for products from natural or organic materials and wash and air toys before use.
8.For wooden toys: buy solid, unvarnished and unpainted wooden toys with as few glued parts as possible.
9.For plastic toys: choose natural rubber toys, look for PVC-free and phthalate-free labels and avoid products which smell strongly of chemicals.
10.For art materials and cosmetics: do not buy fragranced toys, as these can trigger lifelong fragrance allergies, which cannot be cured; choose products with food or plant colorings and without preservatives.
To download the WECF Safe Toys Guide, please log on to:
http://www.wecf.eu/english/publications/2009/publications-toysguide.php
Posted by Rei Panaligan at Monday, December 06, 2010

Thank you for posting pictures of the toys. But I think you should be more aggressive with informing the public of your findings. Lumping the toys in one pile, in one photo, does not really tell the consumers much. your crusade will be more effective if you clearly state and show which toys have tested positive for harmful chemicals. The newspaper for instance only vaguely described the toys.